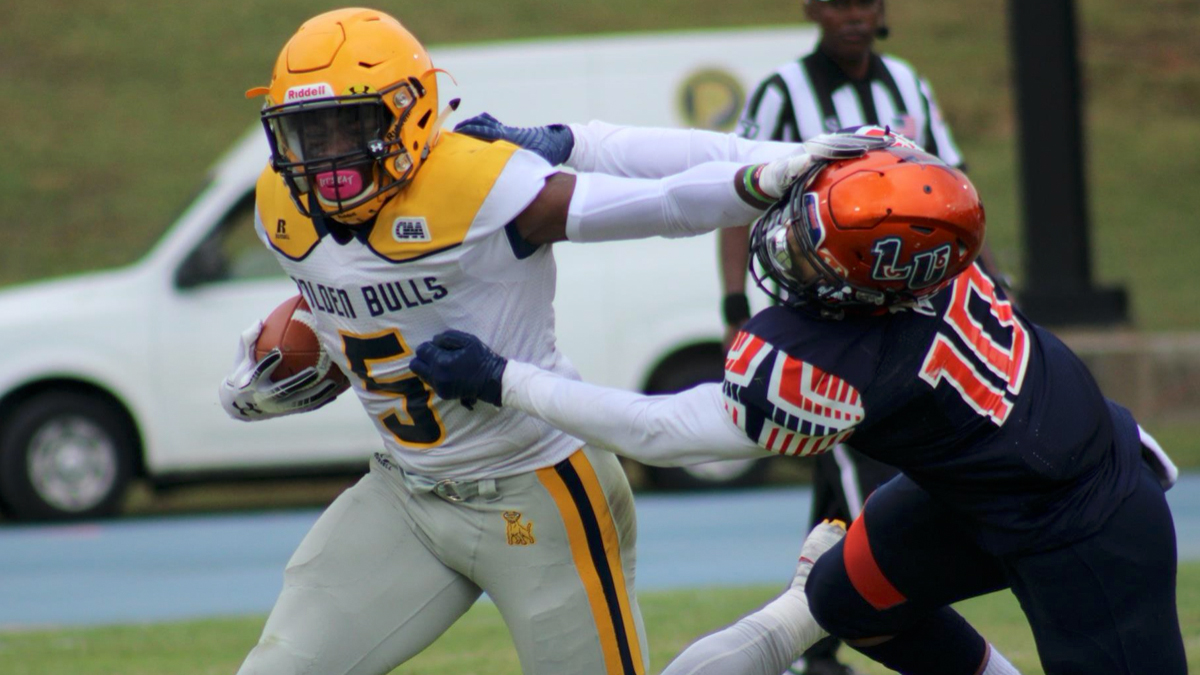 Emmanuel Wilson has found a new HBCU to call home. Away from home.

After rushing onto the scene in his hometown Charlotte, N.C. for Johnson C. Smith University last fall, Wilson entered the NCAA transfer portal in hopes of finding a new home and found one in The Valley.

“Relationships help with recruiting (and it did this time),” said FVSU head football coach Maurice Flowers. “I knew his high school coach, am a graduate of Johnson C. Smith, and he was the Rookie of the Year there. I wanted to leave my history with the CIAA (Central Intercollegiate Athletic Association) and sell FVSU to him and have him want to come play with us and win some SIAC (Southern Intercollegiate Athletic Conference) championships.”

The high-sought incoming redshirt sophomore tailback produced one of the top first years for freshmen last fall where he compiled over 1,000 yards rushing on only 159 carries and 13 touchdowns.

On bringing his talents to the Wildcats, Wilson said, “I always heard about Georgia football and I wanted to come to the south to play with better competition and play with the best.”

The arrival of Wilson will add to what is projected to be a highly-talented, all-around offense with a fine group of new signal callers, growing list talented skill players highlighted by All-SIAC wide out Shemar Bridges, and a deepening offensive line group.

“We already had Marlon (Fleming) and Kentavious (Thomas) and recruited some (other talented) guys, who are coming in, but for us to have the chance to bring in a player like Wilson, he will make the Wildcats better. He has size, speed, elusiveness, hand and bring to the table the size for an every-down back,” pointed out Flowers. “Emanuel was in the top five in Division II through the first seven games last year on his way to the CIAA Rookie of the Year. I also was able to see him personally play against us at Fayetteville State (21 carries for 195 yards and three touchdowns) where he turned a key (late in the game) fourth-and-two where he was stopped in the backfield and broke it for a nice first down run.”

With his outstanding freshman numbers, Wilson garnered not only the CIAA Offensive Rookie of the Year award, but also All-CIAA Second Team and CIAA All-Rookie Team.

The new Wildcat running back posted five games of 135-plus yards for the Golden Bulls. Along with his 195-yard outing against Fayetteville State, Wilson recorded his best performance against FVSU rival Benedict College with 265 yards on 12 totes, including an 83-yard scoring burst, and three scores. The now FVSU back ran 29 times for 152 yards and two scores against Virginia Union.

“My goal is for 150 yards per game, being the team’s leading rusher with 2,000 yards and 20 touchdowns and winning a championship,” stated Wilson of his upcoming goals.

Wilson’s presence to go with Fleming, Thomas and the other solid incoming running backs gives FVSU good odds to not only improve upon last year’s 423 net season rushing yards, but better it by five or six times as many ground-gained yards for the upcoming 2020 gridiron season.

200
The Latest in HBCU Sports and Culture