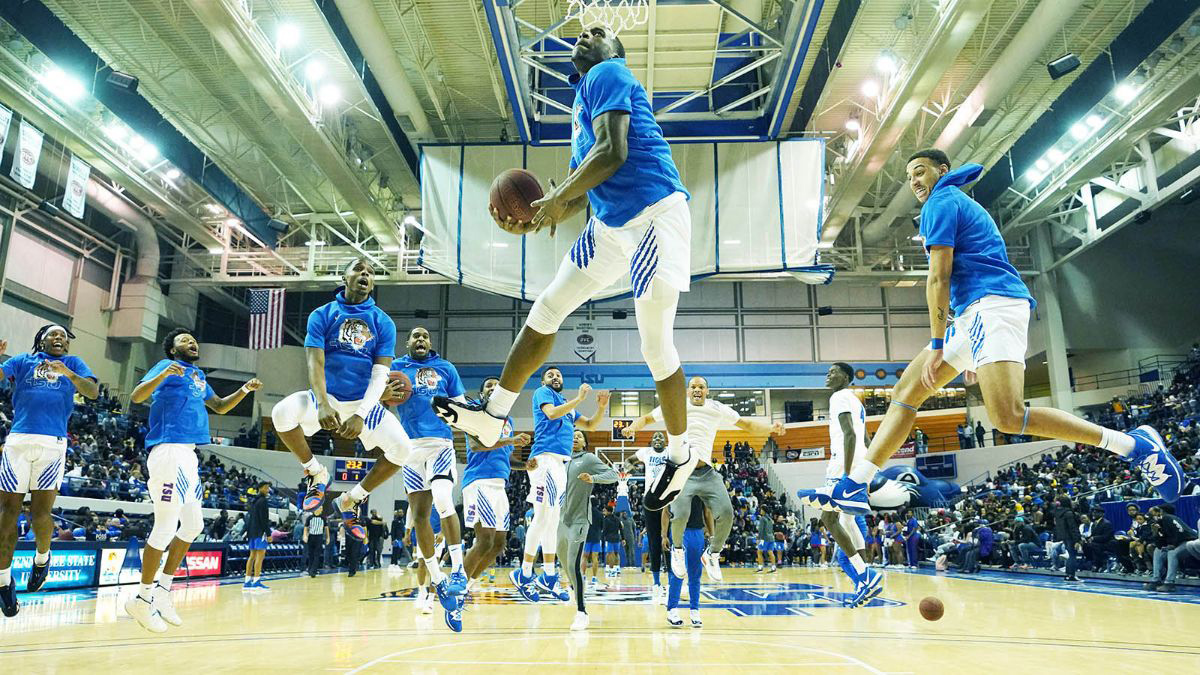 SJG takes a look at the top DI HBCU hoops squads. (Spoiler: Not all of them are in the MEAC and SWAC.)

We’ve now reached the conference play portion of college basketball, which really offers us the first look at which HBCU Division I programs are the best. After months full of “Cut The Check” games or “Cupcake” matchups against D2, D3, NAIA or whatever church league team available on the schedule, we have even competition with which to judge the best of HBCU Hoops.

Here’s where we stand in mid-January.

I know, I know, it’s easy to forget TSU when you talk HBCU hoops. But second-year man Penny Collins has his Tigers playing at a high level so far this season. There’s no breakout scorer, but the Tigers have five players averaging between 9.3 and 11.9 ppg, led by Carlos Mitchell. TSU has nine Division I wins, most of any HBCU on this list, and it is off to a hot start in the OVC.

A&T has quickly gone from a conference weakling to a contender, and even with the sudden removal of its architect, that project continues to be on pace. Ronald Jackson (13.6 ppg and 9.1 rpg) has emerged as the team’s go-to-guy down low, but Tyler Maye, Andre Jackson and Fred Cleveland Jr. are all capable of getting it done on the perimeter and Kameron Langley is more than happy to distribute the ball to them as well as the electrifying Kwe Parker.

NSU lost over 80 percent of its 2018-19 scoring output heading into this season. Yet, after a week-plus of conference play NSU finds itself tied atop the conference. Jermaine Bishop, Steven Whitley and Joe Bryant are a guard trio that the rest of the MEAC must figure out.

Another year, another Texas Southern team that is better than its record. TSU didn’t get the P5 upsets it got at the beginning of last season. But those upsets didn’t help it win the SWAC Tourney, so maybe its for the best. Guard Tyrik Armstrong leads the Tigers with 14.8 ppg, but he’s the only one averaging double-figures. However, there are seven players who average at least six points per game, which is good as Armstrong is currently out with a high-ankle sprain.

The Big South’s newest team beat the second team on this list (Norfolk State) after losing to a team that won’t make it (Howard) in November. There was an ugly six-losses-in-seven game stretch, but at full-strength they can run with any team on this list. Guard Jermaine Marrow (23.9 pug) is one of the best scorers in the country as well as playmakers (6.8 app). Sophomore big man Ben Stanley (21.1 ppg and 7.9 reg) has grown up this season, carrying the team when Marrow was out during the losing stretch. Keep an eye out for them in the Big South.

A MEAC basketball power has been building the past two seasons under coach Ryan Ridder in Daytona. It starts down low with Cletrell Pope, the Moses Malone of the MEAC, who averages 14.6 ppg and 12.2 rpg. Isaiah Bailey is back after missing almost all of last season with an ACL injury and the 6’6 guard is averaging just under 14 points per game. Add in the four players averaging from 7.5 to 9.3 ppg and BCU is a team to watch down the stretch.