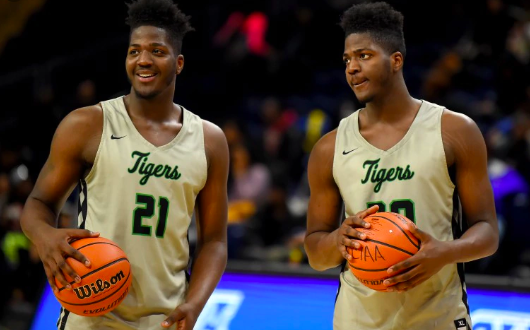 While many people on the outside may look at recruiting as something connected primarily with the head coach, assistants often play an even more vital role in landing talented players.

That said, keep your eyes out for Makhel and Makhi Mitchell’s next move. The twins from Washington, DC recently announced their intention to transfer from Maryland. Makhi, a four-star recruit, and Makhel, three-star recruit did not stick around College Park long.

This provides an opportunity for a program to bring in some major talent. Going back to the point of interaction, the twins could get some attention from Morgan State. Here’s why.

Current first-year head coach Kevin Broadus was key in the recruitment of the twins during their time at Maryland. Although being close to the school, both brothers got major attention from schools outside of the DMV. But his recruiting made the difference.

Broadus is a well-known recruiter in the area. He was an assistant coach at Georgetown and Maryland, two of the most prestigious college basketball programs within the DMV. He grew up in the area as well as attended Bowie State. He understands how to get the best out of the area and it shows.

Broadus coached and recruited five high school All-Americans and 12 NBA players. Some of those names include Jeff Green, Roy Hibbert, and Otto Porter. More recently, he was key in getting DeJuan Summers, Brandon Herbert, LaFonta Johnson, and Henry Sims to all attend Maryland.

And with Broadus rebuilding the Bears program, one or both of the Mitchell twins could fit well in the scheme of things. Broadus likes to drop the ball within the paint on offense and crowd the space with shot blockers on defense. And with both twins being 6’9, this potential pickup could prove beneficial for both sides, especially in the MEAC where size is at a premium.

There will most definitely be some attention for the Mitchell Twins and Morgan State could be in that conversation.