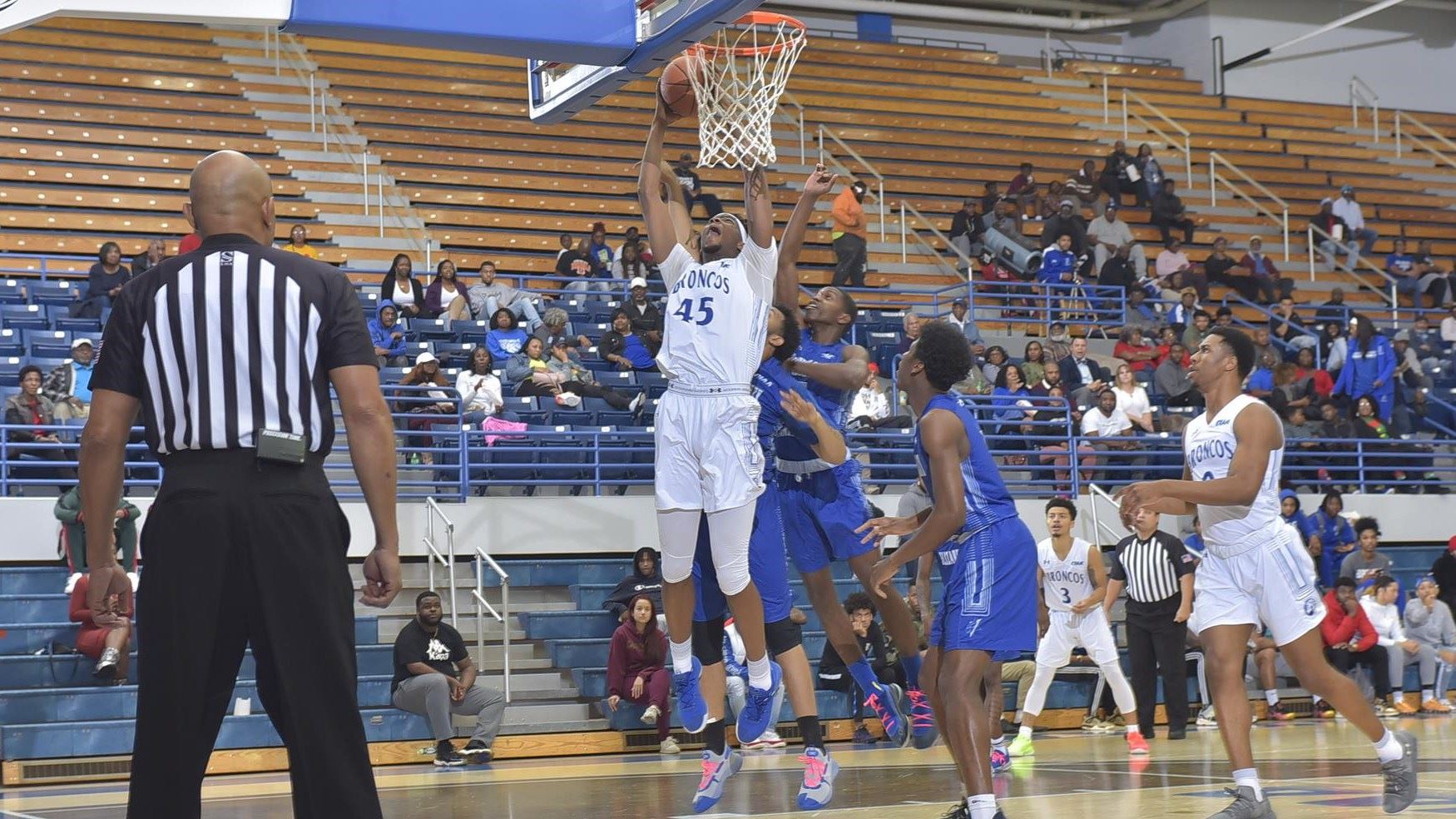 Vikings and Broncos play another tight contest but again FSU gets the win.

Before the Thanksgiving break, Elizabeth City State led Fayetteville State 34-33 at the half in Elizabeth City before the Broncos prevailed 65-59 after four free throws in the last ten seconds.

Monday’s game in Capel Arena was another one that came down to the wire, but the Broncos completed the sweep over the Vikings (7-5 overall, 1-2 CIAA) by a close 53-51 final score.

Fayetteville State (10-1 overall, 3-1 CIAA) led by as many as six (32-26) early in the second half after a knotted halftime score of 21. The two teams battled back and forth with a game total of six lead changes and nine score ties. The last tie of the game was at 51-51 when ECSU’s Rashard Zimmerman hit a three with 29 seconds left in the game.

After a Viking 30-second timeout and foul with 27 seconds left, Mark Burton (Tokyo, Japan) hit a pair of free throws for a two-point lead (53-51).


The Vikings’ Zacheus Hobbs launched a three with 16 seconds on the clock and Jalen Seegars (Greensboro, NC) was fouled with 13 seconds left.

Seegars, who had a 23-for-27 presence at the line so far for the season, missed two big opportunities to seal the game with a four-point advantage.

With the clock in play, Hobbs missed a difficult layup with Seegars and Darian Dixon (Bowie, MD) attempting to block the shot and he missed a desperation three from almost half-court.

“Elizabeth City [State] is a really good team and Shawn Walker is an excellent coach,” said Head Coach Luke D’Alessio. “I guess we [FSU] are becoming a grinding team. Our defense held at the end.”

Will Brown (Gresham, SC) led the game with 14 points, grabbed eight rebounds and blocked four shots. Seegars finished with a double-double of 13 points and ten rebounds with two blocks.

“Will has been coming along,” said D’Alessio. “I have been challenging him every day. I thought he played a terrific game; and that wasn’t an easy matchup. That’s two seven-footers [Tyjhai Byers] going hard and he didn’t back down and he made foul shots [6-for-6].”

Hobbs and Justin Faison led the Vikings with 12 points each while Zimmerman hit 11. Byers had a triple-double of 10 points with 16 rebounds and 10 blocks.

Fayetteville State will travel to Lincoln, PA for a conference game against the Lions on Thursday, December 19 and then to Bowie State on Saturday, December 21.