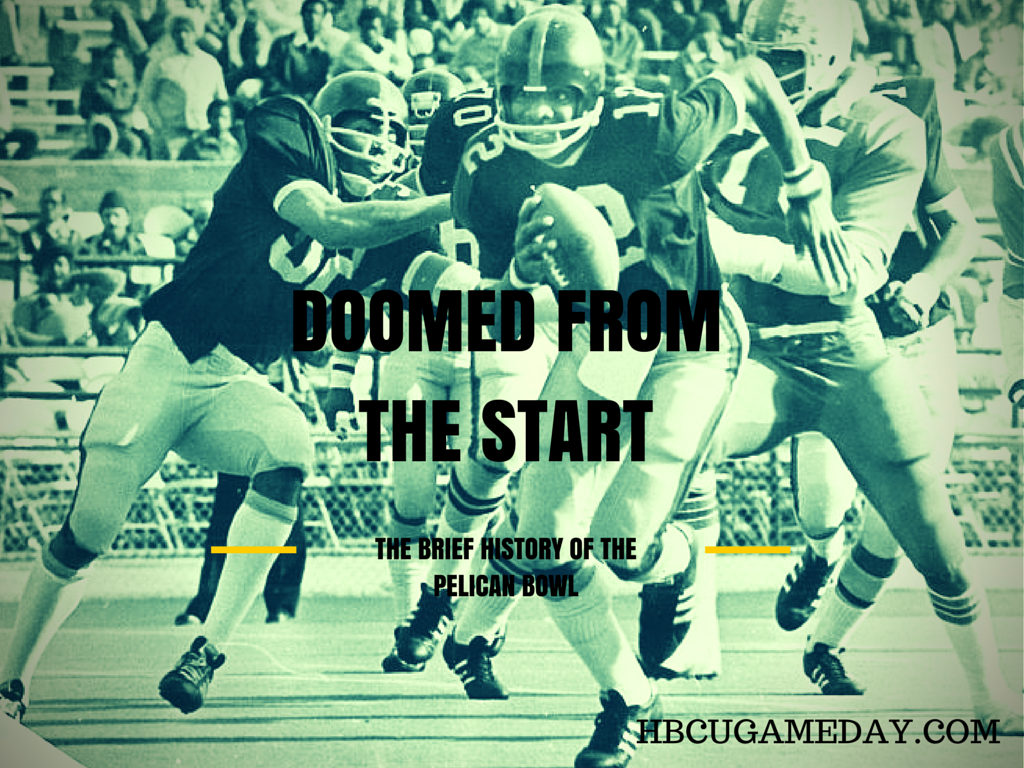 The Pelican Bowl was the first attempt by the MEAC and SWAC to create a black college national championship game.

For all the excitement of the 2014 season, HBCU football ended pretty predictably in this year at the FCS level. The SWAC played its championship game (won by Alcorn State) and the MEAC bowed out in the first round of the FCS playoffs. Pretty much, the same way things have gone since Y2K.

As such, many people are calling for a national black championship system. While that’s unlikely to take place, it’s always fun to talk about. In recent years, nostalgia has led many to wish for a return of the Heritage Bowl–a 1990s matchup that featured top teams from the MEAC and SWAC.

What many people don’t know is there was a short-lived bowl game dedicated to the mythical national black college football championship in the early 1970s. The game featured some of the biggest names in black college football.  Grambling’s Eddie Robinson and South Carolina State’s Willie Jefferies both coached in two games while Grambling’s Doug Williams and South Carolina State’s Harry Carson played in the bowl game, which faced several logistical and financial setbacks during its brief run.

The early 1970s was an unsettling time for black college football. Many of the things that students at black colleges fought for in the 60s were starting to become a reality, and while that was good for black athletes as a whole, it wasn’t necessarily good for HBCU sports. Black players that coaches once had their pick of began moving over to schools in the SEC and ACC, and that was

Out of this environment, someone came up with the bright idea of a bowl game pitting the champion of the mighty SWAC against the upstart MEAC in the early 70s.

Off To A Rough Start

The inaugural Pelican Bowl set the pace for what was to come, both on-and-off the field .The game was originally slated to be played at Mumford Stadium on the campus of Southern University in Baton Rouge. That never happened, though as a shooting on the campus forced conference leaders to find another location.

They settled on Duke’s Wallace Wade Stadium in Durham, NC. Coincidentally, Durham was also the home of the MEAC Champion North Carolina Central Eagles. Playing in front of a crowd of 22,500 Eddie Robinson’s Grambling squad came out on fire, scoring on three of its first quarter possessions. The G-Men left the Bull City with a 56-6 win and another Black College Football national title.

The 1973 Pelican Bowl never happened for two reasons. For one Tulane Stadium, the game’s planned location, was already booked for LSU vs. Tulane. Secondly, the NCAA never sanctioned the game.

Despite those setbacks, the bowl returned the following year. Fresh off its win in the Inagural Bayou Classic, Grambling State returned to the Pelican Bowl in 1974. This time, they’d be the de facto home team, as they hosted South Carolina State at Tulane Stadium in front of 30,120 fans. Keyed by a big game by Doug Williams (the future Super Bowl MVP threw for two touchdowns and ran for another), Grambling won its second Pelican Bowl 28-7.

That would be the high point of the Pelican Bowl. South Carolina State won the right to represent the MEAC by winning the conference title. For the first time in the game’s history, Grambling would not represent the SWAC after having to forfeit a game to Prairie View. (The SWAC ruled Grambling violated the conference’s charter by skipping out on its 1973 game with Prarie View to play Oregon State). Instead, GSU’s rival Southern would represent the conference. The game would be played under the bright lights of the Louisiana Superdome, the same field where Grambling and Southern had just met for the Bayou Classic.

The game would turn out to be the best of the series, as Southern rallied from a double-digit fourth quarter deficit to win 15-12. Unfortunately, the game’s attendance was horrid, as less than 7,000 fans watched the game.

And just like that, the Pelican Bowl was gone.

Looking back the bowl game was an ambitious gamble that didn’t quite work.

One of the biggest problems of the series was that the SWAC teams involved, Grambling and Southern, played in the Bayou Classic as their regular season finales starting in 1974. Both games dwarfed the Pelican Bowl in attendance, as the rivals routinely pulled in over 70,000 fans while the bowl game drew significantly less.  The other problems were some of the same ones the Heritage Bowl would later face–finding sponsors and selling tickets.

“If the game was to have been for the national black championship, someone forgot to tell the fans,”

Though only played  three times in four years during the 1970s, the Pelican Bowl laid the foundation for the Heritage Bowl, which arrived with much fanfare before fading out in the late 1990s.