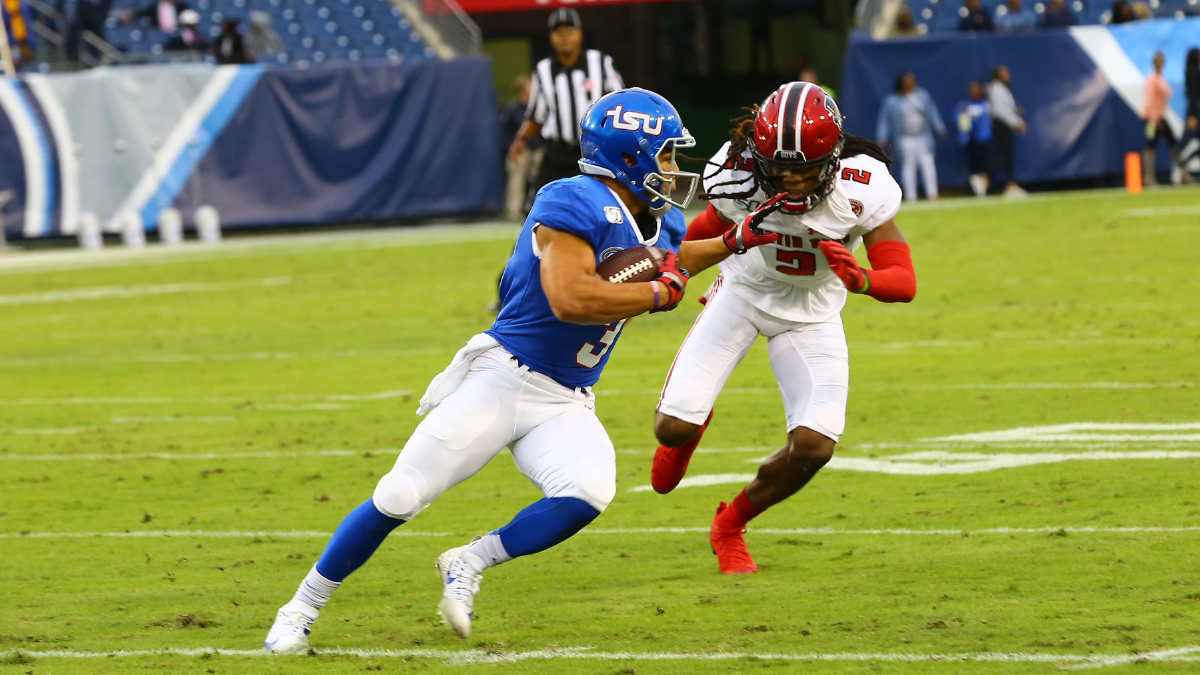 NASHVILLE — Senior Chris Rowland was named Ohio Valley Conference Offensive Player of the Year as announced on Tuesday. Rowland finished his final season at TSU as the nation’s leader in receiving yards (1,437) and receiving yards per game (119.8), while ranking second in all purpose yards per game (175.83) as well as third in receptions per game (8.7). The Nolensville, Tenn. product was also only one of two players in all levels of the NCAA to score touchdowns by rushing, receiving, punt return and kick return. A. J. Jackson of D-III Lake Forest also accomplished the feat.

A team captain, Rowland proved his dedication as a team player in the Tigers 11th game of the season at UT Martin. The senior, who suffered an injury prior to the week 10 game which limited his play to one half against Eastern Illinois, sat out the UTM contest as a receiver and return specialist, but performed his duties as the holder for kicker Antonio Zita.

By participating in the game as a holder, the receiver sacrificed his per game averages in receiving yards, all purpose yards and receptions.

Rowland’s reception tally was the third most in a season in OVC play. Eric Lora of Eastern Illinois accomplished the task twice (2012 and 2013). It also tied current Los Angeles Ram Cooper Kupp (Eastern Washington, 2014) for 19th in FCS history. The mark also passed Hall of Famer Jerry Rice’s 103 in 1984 and 102 in 1983, which is the most for a receiver from an HBCU in FCS history.

The receiving yardage is the most by a receiver in FCS play this season and was the fourth best result for a season in OVC history. Rowland finished 16 yards shy of third and 227 short of the conference record despite missing a game and a half. The senior finished with six games where he caught double digit passes, including a TSU record 14 against Murray State. He also finished with over 100 yards receiving in nine contests which were highlighted by his 202 yard performance at FBS opponent Middle Tennessee.

Rowland went for over 100 all purpose yards in all 11 games he was a part of the offense or as a return specialist, finishing the season with 2,110 yards. The fourth-year went over 200 yards on six occasions with a season best 267 against Jackson State.

Rowland averaged 25.0 yards per kickoff return, ranking 21st in the nation, and 11.9 yards per punt return, good for 10th in FCS. Rowland scored on a 96 yard kickoff return against Jackson State and returned a punt for 56 yards against Eastern Illinois for a touchdown.

Rowland has been invited to play in the NFLPA Senior Bowl. He has also been named to the STATS FCS Walter Payton Award Watch List and for the Black College Football Player of the Year Award.

Rowland is the ninth Tiger to be named a player of the year by the OVC and the 10th award garnered for the Big Blue.