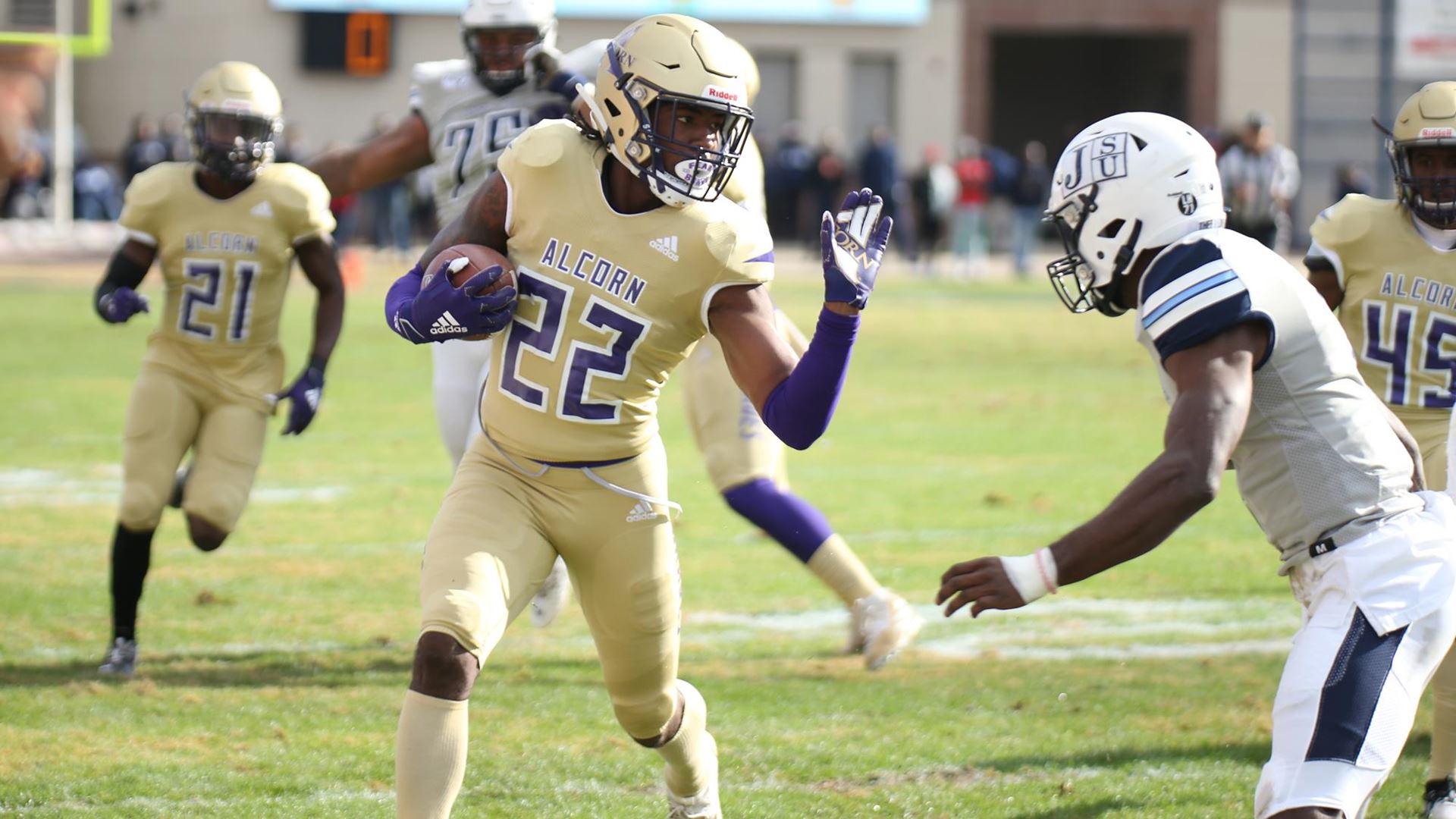 JACKSON, Miss. – A huge first half was more than enough for the Alcorn State University football program as it downed Jackson State 41-6 Saturday at Mississippi Veterans Memorial Stadium.

Junior Felix “Triggerman” Harper threw for 274 yards and four touchdowns, and also rushed for a touchdown.

The 2019 SWAC Championship will be played at 3 p.m. on Saturday, Dec. 7 at Jack Spinks-Marino Casem Stadium in Lorman, Mississippi. Alcorn will play either Grambling State or Southern in a nationally televised game on ESPNU.

The teams exchanged turnovers early. It started with an interception by Wilson on a deep pass in the middle of the field. A couple plays later, Alcorn fumbled and the Tigers recovered at their own 37 after a running play was blown up in the backfield.

On JSU’s ensuing possession, the Tigers decided to go for it on 4th-and-1 at the Alcorn 35 and moved the chains after the Braves jumped offsides. Nothing came out of it though, as a bad snap on a 47-yard field goal attempt was botched and senior Javen Morrison came through with a huge hit on the holder to cause a turnover on downs.

The Braves moved the ball the other way and crossed midfield on a pass interference call on a deep pass to Pringle. After a rush by Duffey moved the chains on third down, Harper aired it out and found Pringle behind the secondary for a 33-yard touchdown. Alcorn led 7-0 with 1:47 to go in the opening quarter.

After a three-and-out by the Braves defense, Alcorn’s offense was on the move again after Blair hauled in a 25-yard pass at the Alcorn 45. Another catch by Blair for 13 yards placed the ball at the JSU 24. The Braves struck on a 21-yard touchdown in the center of the field to Pringle to increase the edge to 14-0 at the 12:31 mark in the second quarter.

On the ensuing kickoff, the ball got knocked loose and senior Allen Bruce scooped it up and returned it 18-yards to the JSU 16. It resulted in a 34-yard field goal attempt that was made by freshman Greg Blue on his first career attempt to put the Braves up 17-0 with 11:22 left in the second.

Midway through the second, senior Kevon Marsh nearly broke a big run, but was able to move into JSU territory after a shoestring tackle. A few plays later, Duffey found space around the right corner and ran it 30 yards to the JSU 3. The Braves punched it on a touchdown pass to Anthony to make it a 24-0 game with 6:36 remaining in the half.

Alcorn got the ball back and threw a bomb to Blair on the first play that went for 65-yards to the JSU 9. After a five-yard penalty, the Braves scored on a 14-yard pass to Blair in the center of the end zone to put them in front 31-0 at the 3:45 mark.

At the very end of the first half, the Braves attempted a 42-yard field goal but it was blocked. Alcorn led 31-0 at the intermission.

The Tigers got on the board on the opening drive of the second half. The big play was a 50-yard pass to Warren Newman on third down to spot the ball at the Alcorn 1. JSU scored on a one-yard run by Keshawn Harper to cut the deficit to 31-6 at 11:32 in the third quarter after the extra point was blocked.

At the 5:49 mark in the third quarter, the Braves took over at the JSU 43 after a good defensive series, which included a sack by senior Theron Bonds. Alcorn took advantage of the great field position and punched it on an 11-yard quarterback-keeper by Harper to stay ahead 38-6. The series included a 4th-and-4 conversion on a first down pass to Duffey for nine yards.

Alcorn’s final score came early in the fourth quarter. It was setup by a fumble recovery by junior Mikail Webb in JSU territory. It setup a 21-yard field goal that Blue nailed with 10:42 left.

The Braves unloaded their bench late. Sophomore Jyron Russell came in at quarterback but did not throw a pass.

– The Braves went a perfect 4-0 against the SWAC East Division. They are 18-2 against the division over the last five seasons. Alcorn beat JSU for the second straight year after a 24-3 victory last season.

– With two touchdowns in the game, Pringle is up to 13 in on the season. He’s one shy of the single-season school record of 14 set by Tim McNair Sr. in 1994.

– Blair, who is Alcorn’s leading receiver with 776 yards, came into the game ranked 11th in the nation in yards per reception (21.3). That average will go up after grabbing six catches for 136 yards (22.7 ypc).

– Harper now has 2,387 passing yards, 29 touchdowns and just five interceptions this season. He came into the day ranked sixth in the country in offensive efficiency.

– The Alcorn defense entered the game ranked first in both scoring defense (20.6 ppg) and total defense (346.7 ypg). They’ll improve on both marks after limiting JSU to six points and 146 yards.

– Cole’s interception was his fifth of the year. He ranks top-20 in the country in interceptions per game.

Opening Statement
“This is a great venue, and I thought we played a super ball game against a great team in Jackson State. Hats off to the JSU team and coaching staff for the way they played. Today is a testament to our young men for the way they competed and got off to a fast start. Our guys really worked hard to prepare themselves for this game, and they came out and executed and put points on the board. The defense obviously did an outstanding job as well and almost walked away with a shutout.”

On how big of an advantage Alcorn will have by hosting the SWAC Championship
“Anytime you play a home game you’ll have an advantage. It’ll be big to play in front of our home crowd again and all the excitement that comes with it. Our guys will be able to sleep in their own beds and play in front of our fans. It was very important for us to win today in order for us to play at home.”

On how the program has been able to win six straight division titles
“When I look back at it, I think about all the days that we came together as a program, and I think about the coaching staffs that we’ve had. We’re all so close as a unit, and I think about the amount of work we put in just during preparation. We also have great kids who fight so hard both on the field and in the classroom. To win six in a row says a lot about our recruiting, our coaches and the kids for all the work they’ve put in.”

On whether he was surprised that the game got out of hand so quickly
“I just think that when we’re executing, and when our guys are doing what they’re supposed to do, it makes the game so much easier. The scout team gave us good looks during the week and we did a lot to prepare for this game.”

Quoting quarterback Felix Harper
On not scoring right away today, but then finding his rhythm
“The coaches just told me to settle down and that it’s just another game on the schedule. We took it one play at a time, one drive at a time and one quarter of a time. We executed as a unit to get the job done.”

Quoting defensive back Taurence Wilson
On the team’s defensive performance
“This was a result of the preparation we did this week, and everyone doing their jobs. We wanted to be fundamentally sound and make the plays that we were supposed to make.”

On his interception
“That one came from the film. I have to credit watching film for that interception. We all watch so much film as a team and I saw their formation setup and was able to get a good read.”