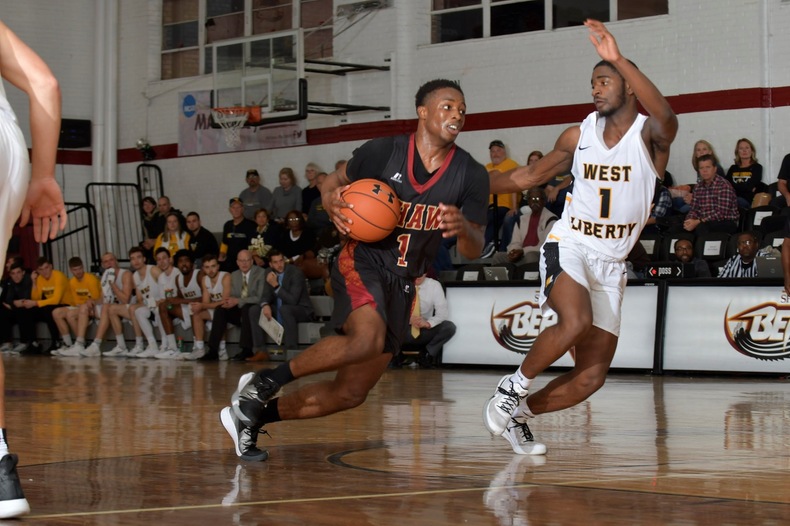 While Kelley paced the Bears in scoring, three other Bears joined him in double figures with senior guard David Madol (Manchester, NH) with 22 points and six rebounds. Freshman guard Nigel Martin (Cleveland, OH) chipped in with 14 points while leading the Bears in the rebound column with eight, followed by freshman guard Dhashon Dyson (Chicago, IL) added 11 points and six rebounds in a reserve role.

Morehouse jumped out to an early 10-2 lead to open the contest before an 8-0 run from the Bears knotted the score at 10-10 with 12:56 left in the half. The game of runs continued as the Maroon Tigers turned up the full-court pressure and answered with a 12-0 run putting MHC up 22-10 before Kelley split a pair of free throws ending the Bears scoreless streak.

Shaw battled back trimming the Morehouse lead to three points on multiple occasions before Martin’s only three-point basket of the night with 26 seconds remaining prior to intermission trimmed the Tigers lead to 41-40. Morehouse missed a 3-pointer at the buzzer to close the first half with a one-point lead.

The Maroon Tigers looked to pull away early in the second half, but Kelley ended those threats twice with a pair of timely free throws and a 3-point shot at the 16:53 mark to cut the Morehouse lead to 51-48. A 5-0 run from the Tigers in a 20-second span pushed their lead back up to eight points at 56-48 before a three-pointer from senior guard Richard Shout (Manchester, NH) ended the run.

Morehouse extended its lead to as many as 12 before a Madol layup trimmed the Bears deficit to 67-57 with 12:14 left. The Maroon Tigers protected its lead swelling it back up to 11 before another Bears run topped off by two Madol free throws with 4:00 left making the score 83-78 in favor of the Maroon Tigers.

Dyson then ignited the final push the Bears needed to prevail going on an 8-0 run by himself to trim the Morehouse lead to 86-85 with 1:51 remaining. The score remained the same at 86-85 after a missed three-point basket from MHC allowing Shaw to call a timeout with 33 seconds left.  Out of the break, the Bears caught a break as Kelley recovered a loose ball before it went out of bounds, nailing a turnaround jumper that bounced in with just 10 seconds left sending the Gaines Center into an uproar. Morehouse got one last look from behind the arc with, but it was off the mark sealing the upset victory for the Bears.

Following a quick turnaround, the Bears will return to action Saturday (Nov. 16) as Shaw is set to face Fort Valley State University at 2 p.m.