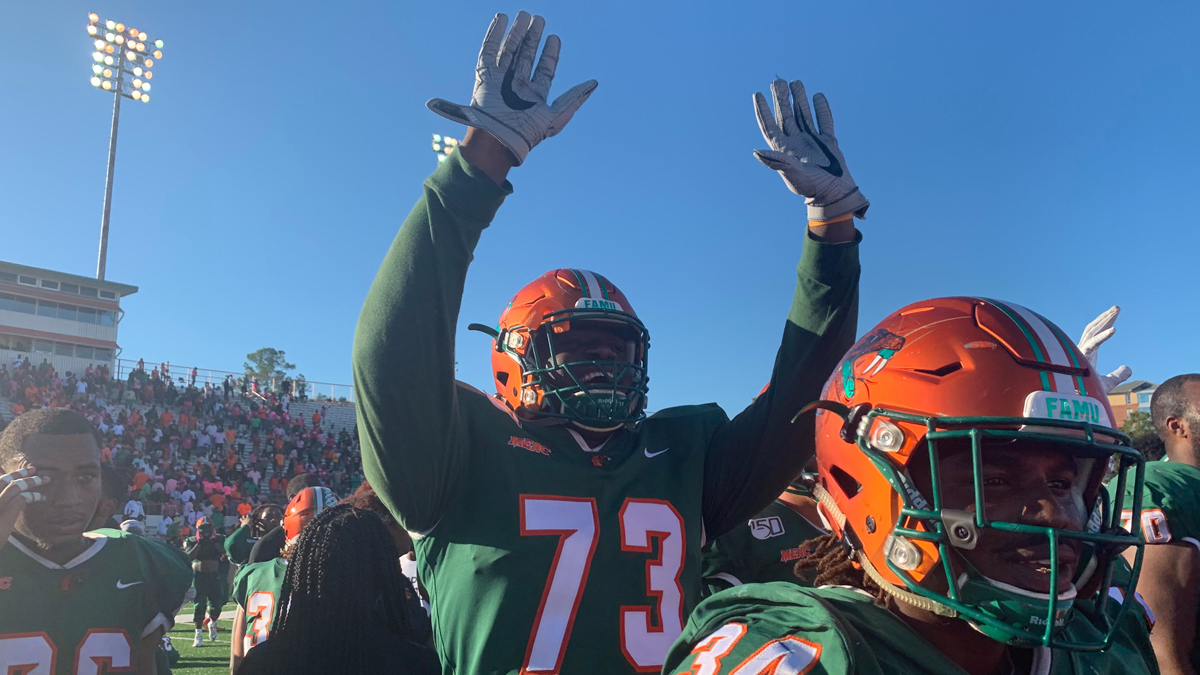 North Carolina A&T brought all the smoke down to Tallahassee. But when the smoke cleared, FAMU came out with another win.

The HBCU football world had to wait a day longer than expected, but the game everyone wanted to see was worth the wait.

Florida A&M and North Carolina A&T squared off on Sunday in Tallahasee in a heated game that came down to the wire as FAMU came up with a 34-31 win at home over the back-to-back MEAC champs.

After finishing regulation tied at 28 each, A&T inched ahead on a field goal but Rasean McKay connected with Marcus Williams for a 22 yard touchdown to clinch the game. The win was FAMU’s second in a row over A&T.

“These guys continue to amaze me,” FAMU head coach Willie Simmons said after the game. “Amidst every type of adversity we can see. Pushing the game back. Pregame scuffle. Halftime scuffle…

The game was full of emotion and at times nearly out of control. A&T stars Elijah Bell and Mac McCain missed the second half after being kicked out of the game following a halftime scrap between the two squads, as well as a FAMU assistant coach.

FAMU jumped out to an early lead as Ryan Stanley connected with Xavier Smith for a 56 yard score just minutes into the game. A&T would respond with a short plunge by quarterback Kylil Carter before Stanley struck again, this time a five-yard pass to David Manigo.

The back-and-forth continued in the second quarter as Jah-Maine Martin scored on a nine-yard run to tie the game before running back Azende Rey hit Marcus Williams for a 21 yard score on a halfback option pass to give FAMU the 21-14 edge heading into halftime. Both team scored just one TD after halftime, but Noel Ruiz’s second field goal with two seconds remaining forced the game to go into overtime.

Both teams were forced to play backup quarterbacks late in the game, but FAMU’s McKay was able to get his team into the endzone after Stanley suffered a sprained AC, while Jalen Fowler couldn’t do the same for A&T.

FAMU’s run defense was especially impressive as it held Martin, one of the best backs in FBS football, to 71 yards on 17 attempts.

FAMU remains unbeaten in MEAC play (4-0), however it is ineligible for the Celebration Bowl and the MEAC title game as a result of penalties by the NCAA. The win did give a boost to its rival, Bethune-Cookman, who now sits atop the MEAC with just over a month to go in the regular season.

Simmons was happy for the win, but he said it only becomes program-defining if his team finishes strong.

“Last year we beat these guys on the road on a field goal and nobody remembered that because of the way we finished. Our motto is fight to finish.”

And on Sunday, that’s just what the Rattlers did.