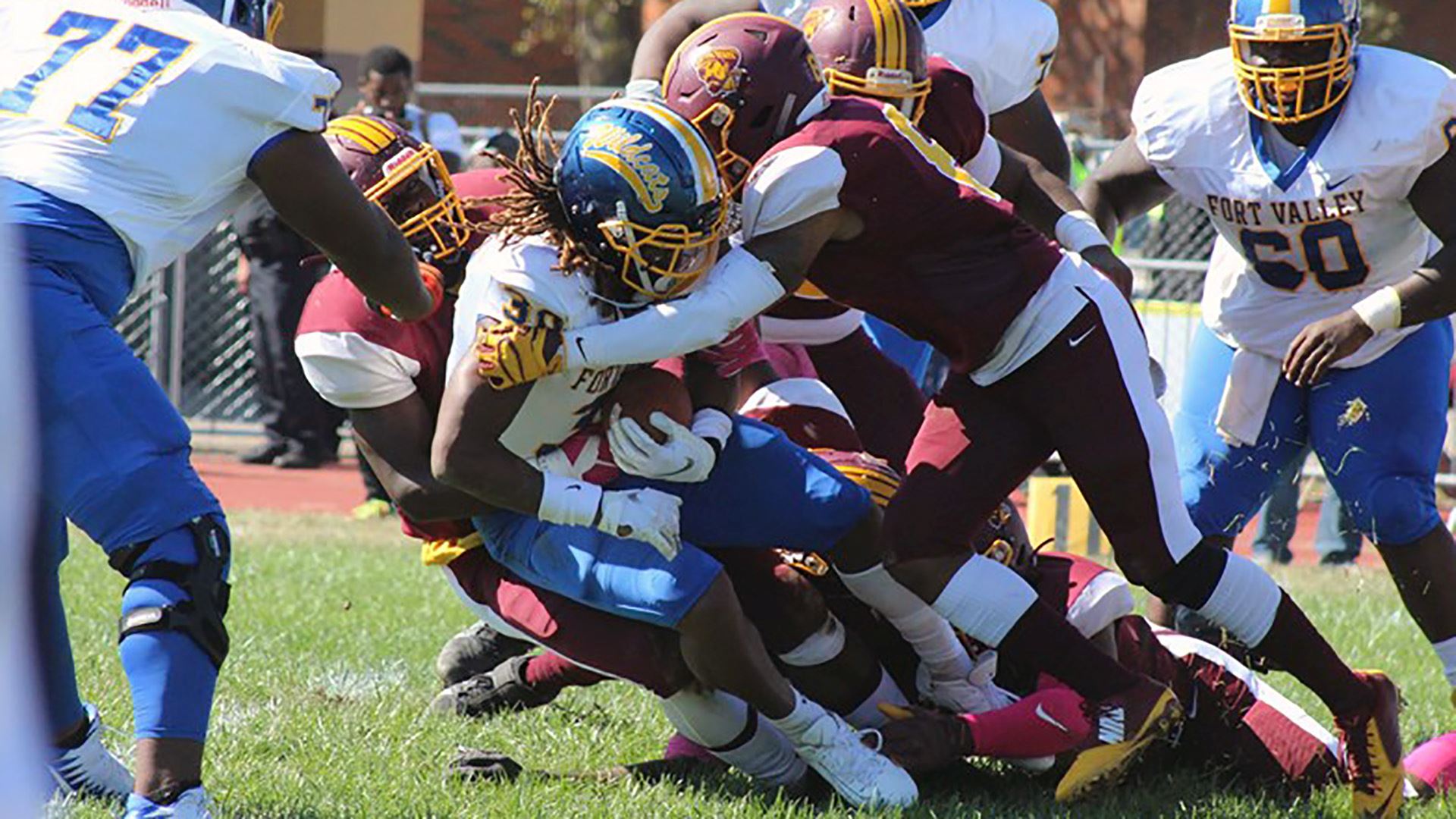 WILBERFORCE, Ohio – After capturing the lead with 4:59 left in the second quarter, the Wildcats defense lit the fuse to pull away Saturday afternoon. The Fort Valley State defense forced back-to-back fumbles and returned both for identical 68-yard touchdowns and the offense scored eight touchdowns and a pair of field goals in a point explosion of a 77-34 football victory over Central State.

Following a Marlon Fleming two-yard plunge to retake a 25-20 lead, the Wildcats (4-2/2-0 Southern Intercollegiate Athletic Conference East) Kentron James picked up fumble from the grass on the second Marauders (2-4/1-1 SIAC West) play of the ensuing drive for the touchdown. It was déjà vu as Aaron Dore repeated the same 68-yard fumble return feat and turned the tide for good in a matter of 2:09 leading into the half ahead 37-20.

FVSU quarterback Slade Jarman engineered a 64-yard touchdown drive on the second half’s first possession when he hit Shemar Bridges from 18 yards for a 45-20 margin 2:04 into the third quarter. The Wildcats offense scored five touchdowns and a 32-yard Eli Mashburn field goal in six second-half possessions to keep the Marauders at bay.

The Wildcats posted their fourth win in row, tying the longest such streak under head coach Kevin Porter, and second winning run of four consecutive since Oct. 7 through 28 games of the 2017 season.

The 77-point FVSU explosion was the most points scored in over a dozen seasons. It was the first time the Wildcats have put more than 60 points on the board since at least 2007 and the most points overall since winning 59-21 at Kentucky State on Oct. 11, 2008. FVSU reached 50-plus points for the second time in three weeks after it defeated Benedict College, 50-16, two weeks ago.

The two SIAC opponents amassed 1,115 combined total yards of offense on 153 plays. FVSU outgained Central State, 592-523 – 482 passing for the Wildcats and 316 rushing for the Marauders.

Individually, Jarman surpassed 300-yards through the air for the third time this season with 386 yards on 33 of 48 attempts with four touchdowns. The senior also ran seven times for 30 yards and a two-yard score for 416 yards of total offense.

Linebacker Majeste Hansberry paced the visitors’ defense with his fourth double-digit tackle day with 10 to go with a pass breakup. Zach Anderson added six stops, while Jahseari Patterson forced a fumble along with five tackles and two for a loss. Antonio Golden forced a fumble and had five tackles. Both Demetrius Harris and Amos Corgelas registered sacks.

The Marauders loss overshadowed the huge rushing game by running back Terraris Saffold. The senior rushed 13 times for 235 yards and three touchdowns of 73, 72 and 18 yards. He added three catches for 28 yards for a 263 all-purpose yards.

FVSU aims to continue its rise with its biggest home contest of the year next Saturday afternoon, Oct. 19. The Wildcats host the Maroon Tigers of Morehouse College in the 2 p.m. Homecoming game at Wildcat Stadium.