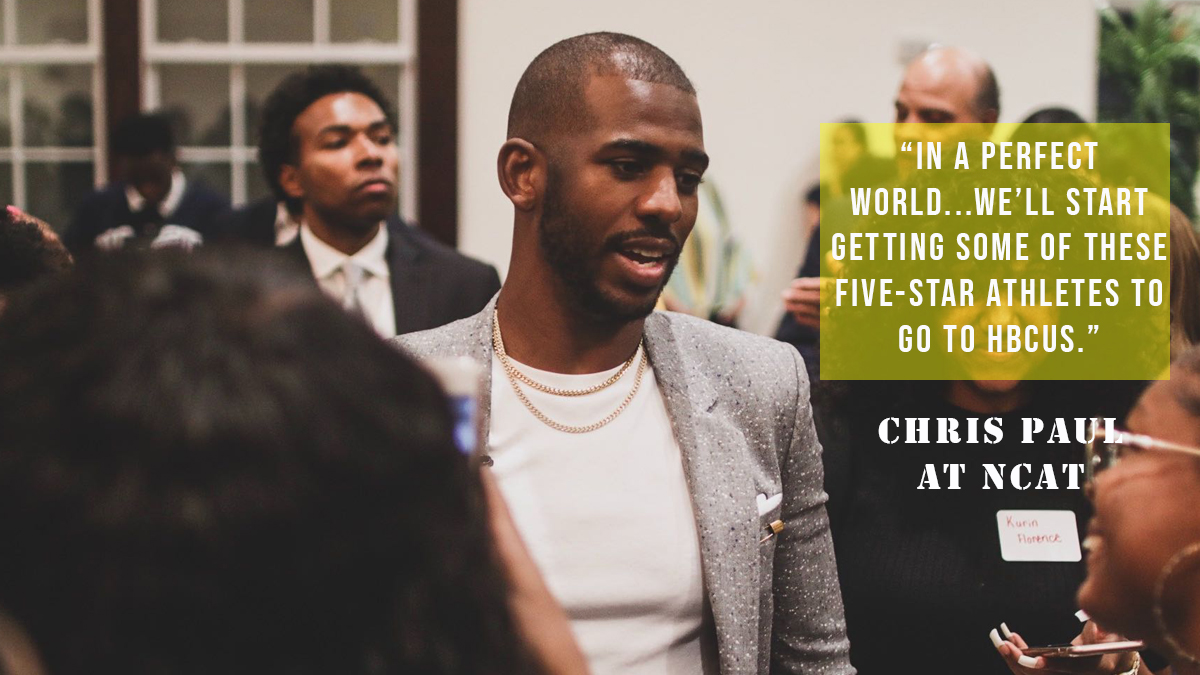 Chris Paul visited North Carolina A&T on Wednesday where he talked about sports and media as well as the chance of 5-star recruits heading to HBCUs.

North Carolina A&T was one of those schools Paul repped last season. But as we’ve seen in the past, Paul isn’t just wearing HBCU gear, he’s investing in them.

Paul visited the campus of North Carolina A&T on Wedneday to bring an unique opportunity to students at the largest HBCU in the nation.

The Winston-Salem, North Carolina native partnered with Harvard School Business School professor, Anita Elberse, to conduct a Sports, Media, and Entertainment Class Demo that discussed case studies in these respective fields. Paul was inspired to bring the class to a HBCU after he attended a similar session at Harvard University with LL Cool J and Channing Tatum.

“Obviously everyone knows that I went to Wake Forest University but I’m probably the only one in my family that didn’t go to an HBCU,” Paul said. “So I saw an unbelievable opportunity, like we should try to get these courses and classes into HBCUs.”

In two separate sessions, North Carolina A&T students got the opportunity to engage with Paul and Elberse about personal financial strategies, and business tactics implemented by some of the most notable brands in the world.

Bleacher Report’s own Taylor Rooks even made a guest appearance during the second session to help moderate the class discussion.

Being able to bring this opportunity to a HBCU is extremely important to Paul because of his close family connection to multiple HBCUs, most notably Winston-Salem State University.

“It’s a whole different feeling when you are at an HBCU, in my mind I always say that I went to one,” Paul said. “It’s just an unbelievable feeling the environment, the energy, it’s just always special.”

Paul believes in the importance of HBCUs and believes continuing to preach about the value of these institutions is vital.

The 15-year NBA veteran said that while he can’t make everyone a spokesperson for HBCUs, he can play his part in educating the people around him about the need for these illustrious schools.

“You can’t make someone’s passion their passion,” Paul said. “So for me I just think it’s about raising awareness and making people aware or try to make them aware that you can get an unbelievable education and experience at an HBCU.”

As of late, the idea of five-star prospects attending HBCUs has been a big topic of discussion. Journalists like Chris Broussard and Jemele Hill, both of which went to PWIs, have been pushing the idea. Paul, who sixteen years ago was a five-star recruit himself, sees the potential for a culture shift in favor of HBCUs.

“In a perfect world …. we’ll start getting some of these 5 star athletes to go to HBCUs,” Paul said. “Just know that my kids will know that there are other options out there.”