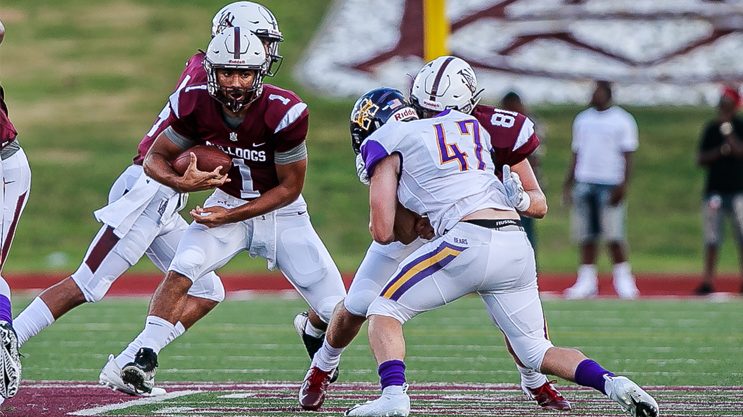 Alabama A&M comes up with a big comeback win over UNA, powered by Bentley

It looked like Alabama A&M was headed for another early-season disappointment on Saturday night after the first half against North Alabama.

But that’s why they play two halves.

AAMU came up with a big second half effort that resulted in a 31-24 win over North Alabama on Saturday night. It was AAMU’s first win in 31 years over UNA.

Running back Jordan Bentley lead a merciless ground attack with 124 yards and two scores and also came up with another score via the air.

“We never had any doubts,” he said. “At halftime, we went in and made the adjustments we need to make.

“To go into the locker room at halftime down 18-0, and then to come back out and see all of our fans are still here supporting us, cheering us on and supporting us to the very end, that can push you through obstacles. It makes a difference. So to win this one for our fans, knowing what this game means to them, that makes it even more special.”

Bentley sparked the run with a pair of third quarter touchdowns to cut the deficit to 21-14. He then caught an 18-yarder from quarterback Aqueel Glass that tied the game at 21 with 38 seconds left in the third quarter.

AAMU would take the lead when Glass found Anthony Howard for a 23 yard score and, after holding UNA to a field goal with 7:10 left, AAMU put the nail in the coffin with a field goal of its own. It was a solid comeback for a team that needed one after it needed a miracle to win against Morehouse in Week One and took a solid beating against Arkansas-Pine Bluff in Week Two.

“The atmosphere is what you want out of college football,” AAMU head coach Connell Maynor said. “I loved seeing all the maroon and white in the stands, cheering on our team. That makes a difference.

“There were a lot of circumstances going on that we had to fight through just to even compete and win this game. I won’t get into all of those things, but I’m proud of our guys for fighting this entire game and coming out with a victory.”

Alabama A&M comes up with a big comeback win over UNA, powered by Bentley