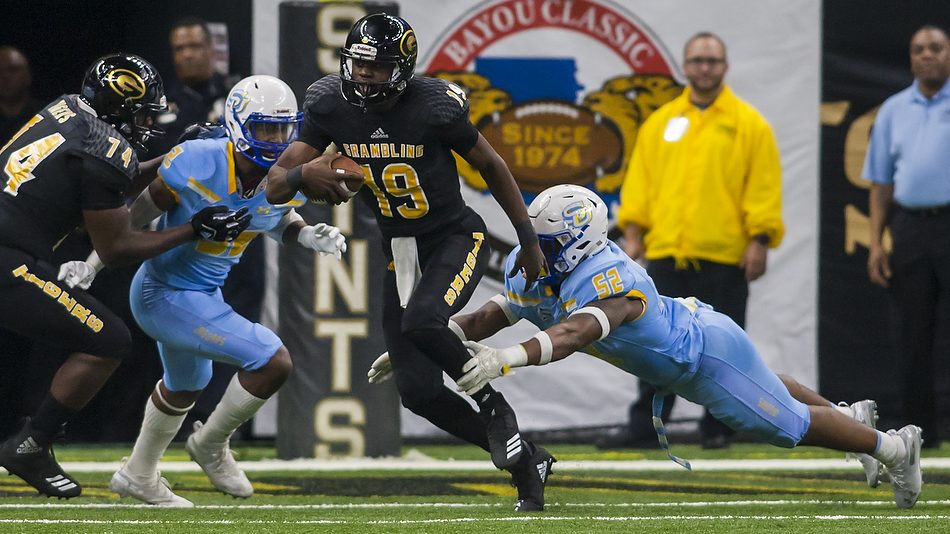 Is Grambling State ready to reclaim the SWAC West in 2019?

Grambling State looks to get back on top in the SWAC in 2019 after a rebuilding season in 2018.

Grambling put together an amazing run under Broderick Fobbs from 2015 through 2017. During this three-year run the G-Men won 3 straight Western Division titles, 2 SWAC Conference Titles, two Celebration Bowl appearances, one HBCU National Title, two straight unbeaten seasons in the SWAC in 2016 and 2017, a conference record of 17-1, and a regular season conference win streak of 26 games.

The Tigers came into 2018 having to replace players like DeVante Kincade and Martez Carter who will were All-American caliber players. Grambling hoped to reload and get back to another conference title game but the G-Men failed accomplish this for the 1 st time since 2014. The G-MEN would struggle to a 6-5 record and would lose three conference games. Quarterback Geremy Hickbottom stepped into the starting role and passed for 1,945 yards and 16 touchdowns while adding eight additional rushing touchdowns and 500 yards on the ground. Hickbottom lead the G-Men in both rushing and passing in his first season as the starter for the Tigers.

Receiver Devante Davis returns this season after leading the Tigers in receptions and receiving yards with 28 catches for 481 yards and 3 touchdowns. The offensive line was a major issue for the Tigers a season ago allowing 41 sacks and not allowing Grambling to effectively run the football.

Defense has long been a calling card for the G-Men and last year the Tigers were one of the top units in the country when it came to turnover margin, and they were also stingy on third-down defense (28th in the nation at 33 percent). The red zone defense was also a big strength last year, rating 9th in the country. The Tigers finished the season ranked 6th in the SWAC in total defense and was ranked 7th in passing defense. The Tigers do return the majority of their 2018 defensive starters including Anfernee Mullins had five sacks a season ago and linebacker De’Andre Hogues who has been a playmaker for the Tigers since he cracked the starting lineup in 2017. The secondary returns Devanir Martin, Kenon Fontenot and Joseph McWilliams who combined for eight interceptions in 2018.

Grambling returns a total of 69 letters winners, 15 total starters, and added quality talent via the transfer portal such as former LSU defensive end Dantrieze Scott. The G-Men have all of the talent to compete for a conference title in 2019. And we know they have the coach for it as well.

Is Grambling State ready to reclaim the SWAC West in 2019?