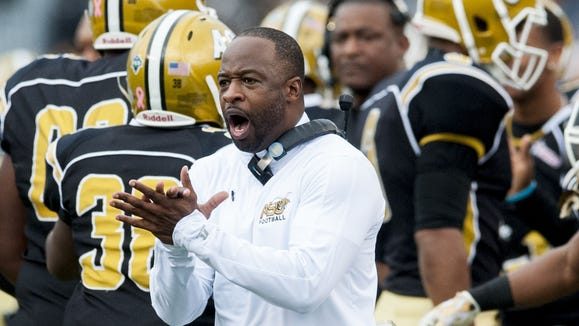 Brian Jenkins out at NCCU after battery arrest

Brian Jenkins tenure as an assistant at N.C. Central was short lived.

North Carolina Central will go into its 2019 fall camp without one of its most notable assistant coaches.

Brian Jenkins is no longer an assistant according to a release sent out by the university on Tuesday afternoon. This comes on the heels of Jenkins’ arrest for tampering with a witness, battery and criminal mischief on Sunday. The alleged incident involved an ex-girlfriend according to the police report.

Jenkins was hired as an assistant to new coach Trei Oliver last winter.

This episode continues Jenkins’ roller coaster ride in black college football over the last decade. He turned Bethune-Cookman into a MEAC power as head coach from 2010 through 2014, winning 47 of 61 games and five MEAC titles during that five year span. He then hit the SWAC, taking the Alabama State job.

Jenkins tenure at ASU, however, didn’t go as smoothly as both he and the university hoped. He was let go after a 9-17 record in two-and-a-half seasons in Montgomery. He resurfaced last year as an assistant for Connell Maynor’s Alabama A&M squad, which featured his son, Brian Jr. at receiver.

Brian Jenkins out at NCCU after battery arrest