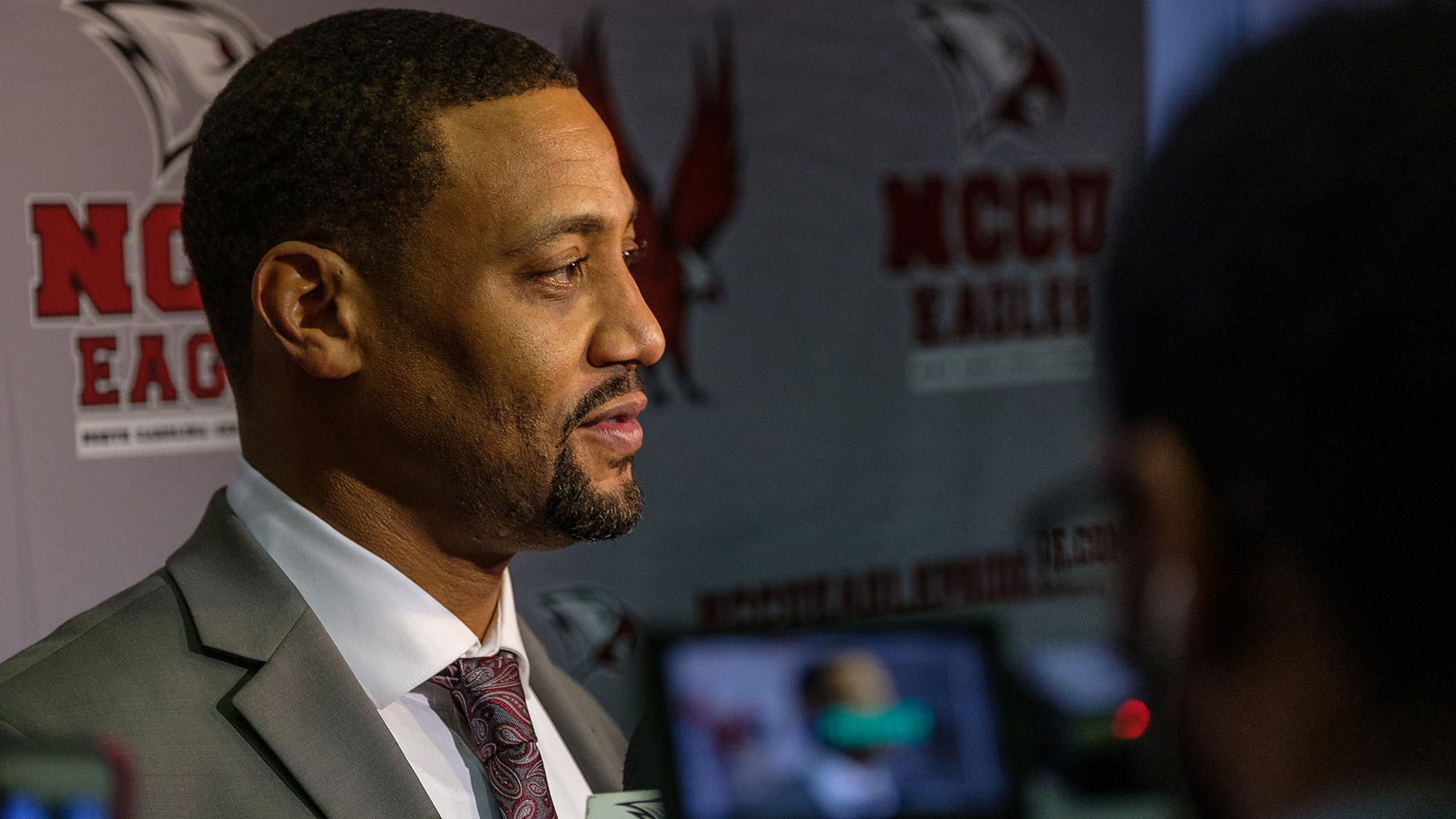 Trei Oliver will be a first time head coach at NCCU but he’ll have a veteran staff of assistants to help shape the program.

Oliver was announced as NCCU’s 24th head football coach on Dec. 13, 2018. The news of his hiring was first reported on HBCU Gameday.

Oliver will announce the rest of his coaching staff at a later date.

Ware spent eight seasons (2011-18) at Bowie State University, including the last five campaigns as offensive coordinator/quarterbacks coach and three years as tight ends coach. In the past four seasons, the to the Central Intercollegiate Athletic Association (CIAA) championship game (2018, 2016, 2015) and the NCAA Division II playoffs (2018, 2017, 2015) three times, winning the CIAA championship and a first-round NCAA playoff game in 2018. Under Ware’s leadership, Bowie State topped the CIAA in passing offense and first downs for seasons from 2015-18. In 2017, the Bulldogs ranked No. 1 NCAA Division II in scoring (54.5 points per game) and total offense (566.3 total yards per game).

Prior to Bowie State, Ware was coach at his alma mater, F.W. Ballou High School. During his five-year tenure (2006-10), the Knights posted a 37-17 record and captured the first D.C. Interscholastic Athletic Association championship in school history in 2006. He was selected as the 2010 Washington, D.C. Pigskin Coach of the Year. Ware started his coaching career as a wide receivers coach at and worked three seasons (2003-05) as offensive coordinator at Calvin Coolidge Senior High School. As a player, Ware ended his NCCU career (1991-94) as the fourth-leading receiver in school history with 132 catches for 1,822 yards and 15 touchdowns. He signed as an undrafted free agent with the NFL’s Tampa Bay Buccaneers and spent two seasons with the Minnesota Vikings. Ware earned his bachelor’s degree in criminal justice from NCCU.

Jenkins brings 25 years of coaching experience to NCCU, primarily at NCAA Division I universities, including eight seasons as a head coach. He burst onto the MEAC scene as head coach at Bethune-Cookman University in 2010. In five seasons at B-CU, the Wildcats captured four conference championships, made three trips to the FCS playoffs and claimed two HBCU national titles. He left B-CU to lead Alabama State University’s football program as head coach for three years, then worked as special teams coordinator/running backs coach at Alabama A&M University last season.

Jenkins started his coaching career in 1994 at Western Kentucky University as passing game coordinator/wide receivers coach and held assistant coach positions at Eastern Illinois University and Bowling Green State University before joining NFL Europe as special teams coordinator/running backs coach with the Frankfurt (Germany) Galaxy in 2001. He then spent seven seasons (2002-08) in the same capacity at the University of Louisiana at Lafayette, before moving to Rutgers University as wide receivers coach for the 2009 campaign. Jenkins played four seasons as a wide receiver, running back and return specialist at the University of Cincinnati, graduating with a bachelor’s degree in social work in 1993.

The first 12 years of his coaching career (1997-2008) were served at a variety of high schools in Virginia and North Carolina, including Hillside High School in Durham, before obtaining his first college job as running backs coach at Southwestern Assemblies of God University in Texas. Tomlinson is a 1993 graduate of Winston-Salem State University.