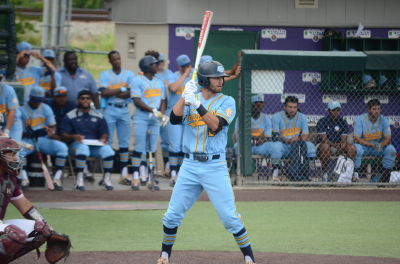 All season, the Southern baseball team showed why it could play against any team in the country. Against Mississippi State Friday afternoon, things were no different.

Starkville, Miss – All season, the Southern University baseball team showed why it could play against any team in the country. Against Mississippi State Friday afternoon, things were no different. Through the top of the fifth inning, the Jaguars maintained a two-run lead and a heavy dose of momentum before the bats got warm for MSU.

However, the Bulldogs scored four runs in the bottom of the fifth and never looked back, defeating the Jaguars 11-6 in the opening game of the 2019 NCAA Starkville Regional.

MSU scored the first run of the game. Center fielder Jake Mangum was hit by a pitch and shortstop Jordan Westburg walked. When Mangum advanced to second, first baseman Tanner Allen flied out to advance both Westburg and Mangum. Then, Bulldogs designated hitter Elijah MacNamee grounded out, allowing Mangum to cross home plate.

The two teams remained scoreless in the second inning before both teams added a run respectively in the third inning. In the top of the fourth, Southern got in a rhythm.

MSU pitcher Brandon Smith came into replace pitcher JT Ginn and the Jaguars took advantage. SU right fielder Ashanti Wheatley singled to centerfield to start the inning. After Malik Blaise walked from being hit by a pitch, Wheatley managed to steal both second and third bases. Bobby Johnson then hit a RBI single to score Wheatley.

Southern was just getting started. Hampton Hudson singed to centerfield while Johnson and Blaise moved to second and third base respectively. Smith then walked Jaguars’ Coby Taylor, allowing Blaise to score and putting other Jaguars in scoring position.

Jaguar center fielder Javeyan Williams led the way for Southern third run in the top of the fourth.  Williams flied out to right field, allowing Hudson to advance to third and plating Johnson. Southern led 4-2.

But like Southern owned the fourth inning, Mississippi State put up four runs in the fifth inning and gained a huge portion of its momentum back, taking a 6-4 lead.

Following a scoreless sixth inning, Williams doubled down the right field line before Johnson homered to tie the game at 6-6.

Then, the Bulldogs responded with three more runs in the seventh inning and two more in the bottom of the eighth inning for cushion to defeat Southern.

Southern (32-23) will play the loser of the two teams in an elimination game on Saturday.