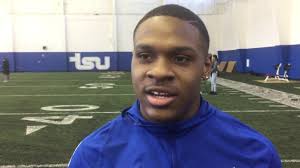 Former Tennessee State DB Terrell Bonds is now on the 90-man roster for the Baltimore Ravens.

NASHVILLE — Former Tennessee State defensive back Terrell Bonds signed a free agent contract with the Baltimore Ravens on Monday. Bonds was added to the Ravens 90-man roster and will be in camp which begins in late July.

The 2018 graduate was a member of the Memphis Express of the Alliance Football League and was invited to the Ravens rookie minicamp. His performance at the two-day minicamp earned him a chance to showcase his talents during the 2019 preseason.

“I’m grateful for the opportunity the Ravens have given me,” Bonds said. “In the next couple months I look forward to training and getting ready for camp so I can earn my spot on the 53-man roster. I’m going to take full advantage of the opportunity.”

Bonds joins former Tiger Anthony Levine on the Ravens squad. Levine is entering his eighth season in Baltimore and is one of the captains on the squad. The two former members of the Big Blue are currently working out together at the Ravens facility in preparations for the Offseason Team Activities which begins on May 20th.