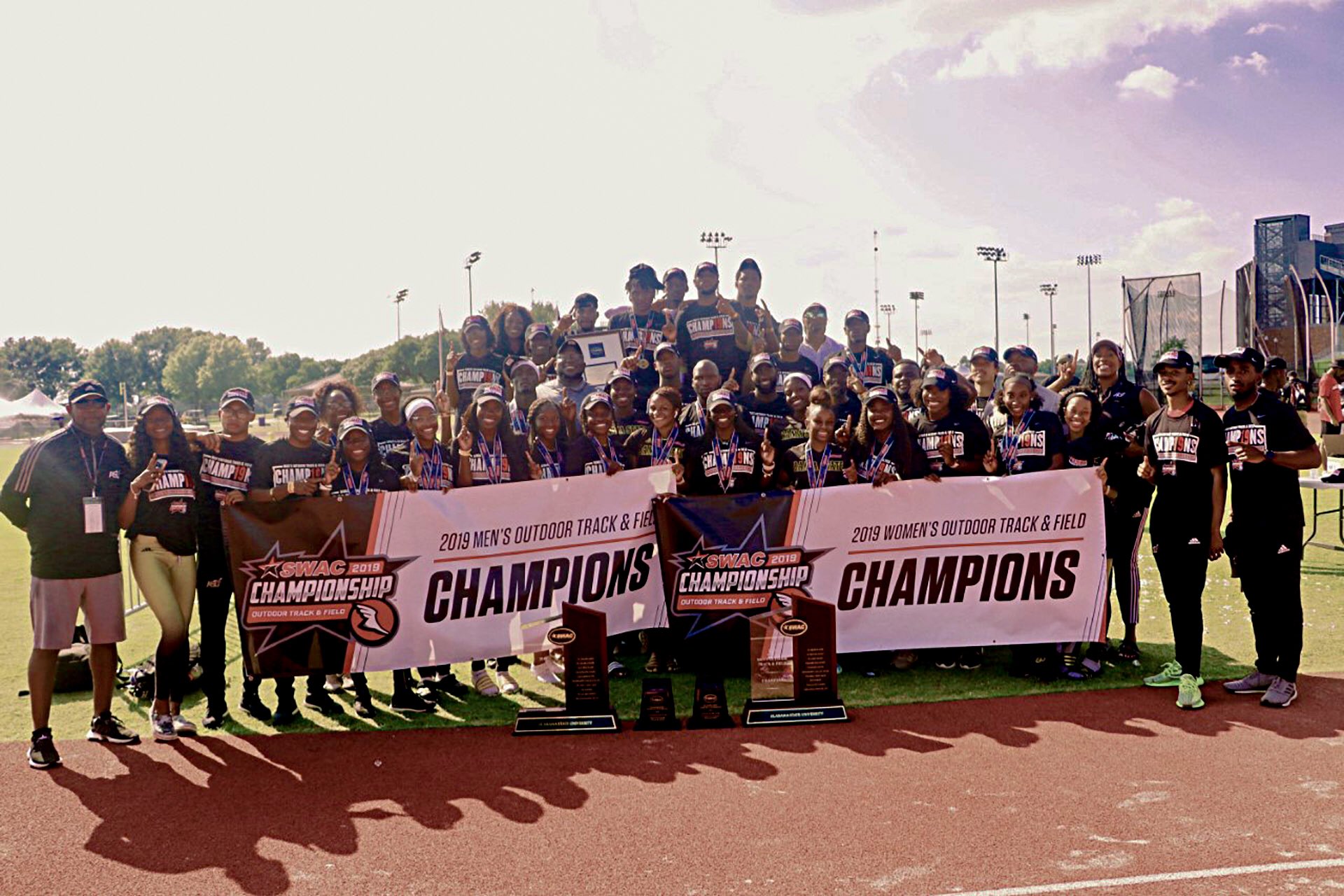 Tenth straight title for the ladies, men claim the first title in 15 years.

The women claimed their 10th consecutive title with the win, pulling away from the field down the stretch with several student-athletes reaching the medal stand. Meanwhile, on the men’s side, the Hornets used the pole vault and 5000-meters to get separation from Jackson State to win their first title since 2004.

Javaris Goins and Chaaka Trahan helped to provide distance between the Hornets and Jackson State in the men’s pole vault competition as the final results were posted during the 5000-meter run. Goins reached the medal stand with a third place finish (3.95 meters) and Trahan finished fourth (3.65 meters) in the event; setting the stage for the 4×400-meter relay in which the Hornets had to finish within reach of Jackson State to win the title. They did one better, finishing ahead of the Tigers to claim the outdoor championship.

Alabama State ended the day with 176.5 points, finishing seven points ahead of Jackson State in second with 169.5 points. Prairie View A&M finished third with 126 points, while UAPB finished fourth with 99.

On the women’s side, Alabama State entered the day in fourth place but with several student-athletes in final heats after qualifying through the preliminary rounds. Throughout the final day of competition, Alabama State scored points in each event and eventually surpassed Prairie View A&M en route to the championship – the third for the Lady Hornets this season (cross country and indoor).

The Lady Hornets finished with 177.5 points, finishing ahead of Prairie View A&M with 154.5 points and Grambling State at 101.

Caesar Kemp won his second gold of the meet when he captured the discus with a distance of 48.67 meters, while Jamie Brown finished third in the triple jump with a distance of 14.79 meters. The Hornets continued to pile up points on the day with Andrew Jackson (second in the 800-meters), along with Coffelt (second in the Steeplechase) and Kevin Smith (third in the Steeplechase) reaching the podium.

The two teams dominated the relay events, both winning the 4×100-meter relays; while the women won the 4×400-meter relay and the men finishing third to wrap up their title.

Quotable – Head Coach Ritchie Beene
“It’s unbelievable to win the championship on the men’s side, we have been chasing that one for a while. It came down to the last relay, and we knew what we had to do. We knew everyone was tired and we knew it was going to come down to the team with the most perseverance, and we showed we had it. We knew we could win, and that it was going to be a dogfight coming in.” – on winning men’s title

“We had a feeling that pole vault was going to big, and that we needed to score some points in that event to help us. For us to go first and second in the 100 was a really big moment, and we knew had to get some of the top places in the pole vault and some help in the 5k to give us a chance to win it in the relay.” – on setting the win up in the relay

“We knew going in that we had to get some people into the finals and we did, so we knew being in fourth heading in that we were in good shape. We had to get people in the finals, and when you lose someone like Charminiqu (Hackney) during the meet, you have to have people step up. We knew we had some young ladies who could run, and those 1-2 and 1-3 finishes were big for us.” – on women’s side winning the title going into final day in fourth place

“Our sprinters were trained properly and we knew that. Our coaches did a great job of getting them ready for the event. I had faith in the kids and our coaches to get the job done.” – on sprinters dominating the events on Sunday

“Field events are always key. That is what gave Prairie View an opportunity on the women’s side, and if they would have had a few more pieces on the track then it could have been different. They are going to be good down the stretch.” – on how important field events are in the championship meet