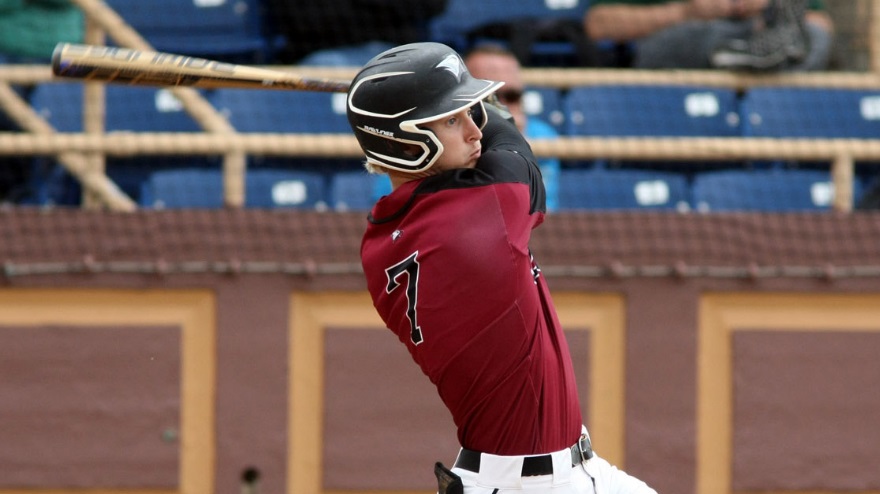 DURHAM, N.C. – A pair of big innings were the separators between North Carolina Central University and Bethune-Cookman as the Eagles scored five in the bottom of the sixth to pull away for a 7-2 win in game one, and the Wildcats pushed in three in the top of the 11th to take game two, 8-5 on Saturday, April 20 at the Durham Athletic Park.

NCCU (17-19, 8-7 MEAC) was stymied early by Anthony Maldonado (West Palm Beach, Fla.) as he held the Eagles to just one hit through the first three innings.  The Eagles broke through in the fourth inning as Vinny Bailey (Raleigh, N.C.) exited the ballpark to right field for a two-run homer, sending the home side ahead, 2-0.

The Eagles broke the game open in the bottom of the sixth as they lit up the scoreboard with five runs to stretch the lead to 7-0.  The Eagles batted around and notched runs on an RBI double from Bailey, RBI singles from Timmy Fischvogt (Kernersville, N.C.) and Josh Brammell (Harrison City, Pa.) and a two-RBI single from Corey Joyce (Lexington, N.C.).

BCU (14-26, 7-10 MEAC) got its only runs of the game in the top of the sixth on a two-run home run from Brandon Wilkes (Holly Hill, Fla.), but that was all the trouble that Chris Krennrich (Fox Lake, Ill.) would run into during the contest.  Krennrich tossed 6.2 innings with seven strikeouts, and retired 13 consecutive batters with five punchouts over that run on his way to his second win of the year.

BCU got going early in the second game as Brady Van Hook (DeLand, Fla.) hit a solo home run as just the second batter of the game.  The Eagles jumped ahead in the bottom of the third on a two-RBI single to right field to move the hosts in front, 2-1.

The Wildcats pulled the lead right back in the top of the fourth on a single and an error, but a bases-loaded sacrifice fly from Nick Fajardo (Durham, N.C.) once against leveled the game at 3-3 in the bottom of the frame.

The game didn’t stay tied for long after a solo home run from Zach Spivey (Ormond Beach, Fla.) and an RBI single from Over Torres (Elizabeth, N.J.), to give the Wildcats the advantage once more, 5-3.

After three full additional frames, BCU finally found a way to break the deadlock in the top of the 11th, started on an RBI single from Joseph Fernando (Brooklyn, N.Y.).  The Wildcats tacked on two more on the second home run of the game from Spivey to eventually claim an 8-5 win.

Joyce finished with four hits and four RBI over the doubleheader, and Brammell also had four hits and an RBI.  Bailey collected three hits and double twice as well.

The Eagles will be back in action on Tuesday, April 23 against Duke at the Durham Bulls Athletic Park at 6:00 p.m.