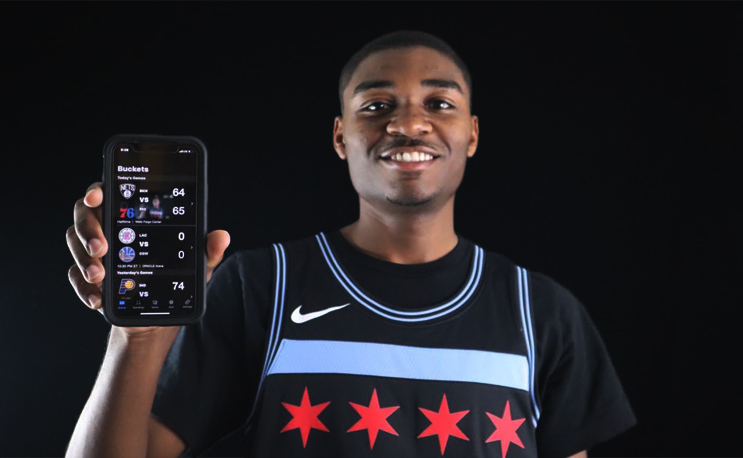 A Chicago kid drawn to an HBCU by its family atmosphere decided to create an app that allowed NBA fans to keep up with the game.

Romell Bolton wanted to use his computer science skills to do something besides homework. So the North Carolina A&T junior decided to develop an app, one that he and his friends could use and that he was passionate about.

Four months later, just in time for the NBA Playoffs, Buckets: Basketball Data app is now in the Apple Store.

“I started the app on Jan. 1,” Bolton told HBCU Gameday. “I said I wanted to make a product and get it into the app store. I didn’t want to release it until it looked like something a company would produce. “

He wanted to do an app during football season, but when it didn’t happen he didn’t give up. Like any good app, the Buckets app solves a problem that Bolton felt needed to be addressed. He says many apps make following the basic info for most fans too complicated and not interactive enough.

“I noticed that apps like ESPN…they were cluttered and had a lot going on. Most people want scores, stats and standings.”

Bolton says his app is a clean and more concise solution to providing more reliable scores, stats and standings. It also integrates social media and a quiz section which allows users to test their knowledge.

The Chicago native’s path to Greensboro was an intentional one. He said he felt drawn to the HBCU lifestyle, despite being far away from the majority of them.

“I was struggling with deciding where I wanted to go. I heard a lot of great things about HBCUs.”

A college tour took Bolton to several HBCUs, and on the third it stopped in Greensboro. He mentioned the kindness of his tour guides, along with food and free gear, that attracted him to the school. The strongest attraction, though, was the family atmosphere including both students and professors.

“They sold me on being a family. It wasn’t a trick to get me in here. I talk to people at other schools and they just don’t have that.”

One of those professors is Dr. Siobahn Day. The three-time HBCU graduate was recently a student herself as just last year she became the first African-American woman to receive a PhD. in Computer Science at A&T. Bolton says that gives her a different perspective that influences the way she teaches.

“I feel like she’s one of the best teachers on campus. She knows what works and what doesn’t. Her class is more interactive and she won’t powerpoint you to death.”

Dr. Day speaks highly of Bolton as well, calling him a “shining star” in the department.

“He’s a student leader, leading the Association of Computing Machinery and a certified associate android developer,” Dr. Day told HBCU Gameday. “I’m excited that he’s launched his “Buckets” application for the sports lovers of the world! Congrats to Mr. Bolton on the launch of his first application.”

That nurturing helped Bolton get the project done, and he says he’s not finished yet.

“I definitely plan on making a lot more improvements,” he said. ” I want to add more content and quiz features.”

The app is now available at the Apple store. Give it a download today.