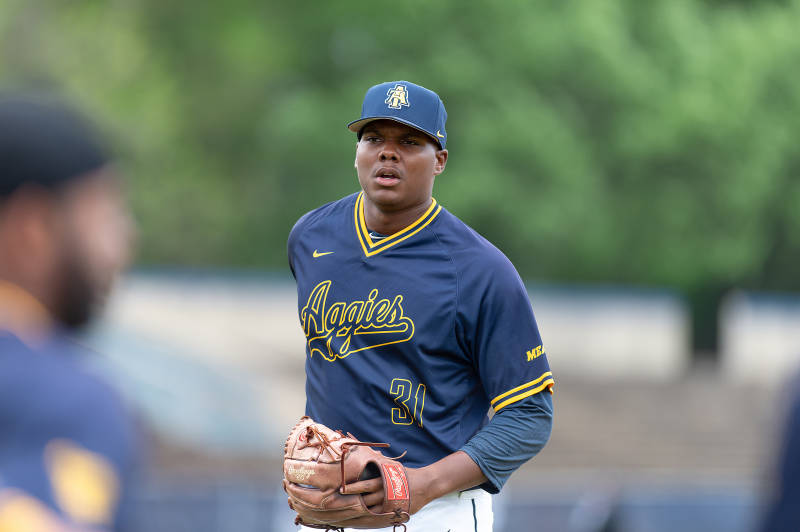 A wild weather weekend allows enough of a window for two games.

GREENSBORO, NC – In what is further proof that Mother Nature knows better than everyone else, the North Carolina A&T and N.C. Central baseball teams actually got two baseball games played on a day that dark clouds hovered over War Memorial Stadium on Sunday.

N.C. A&T won the first game between the two archrivals, 6-4 before the Eagles returned the favor and won the second game 6-4.

The two teams were scheduled to play a three-game series starting on Friday night. Friday’s game, however, was rained out. Another rainout occurred on Saturday leaving the two teams one day to play three games.

With inclement weather in the forecast, the hope was to get one game played. But the second game went by with incident leaving only one game to make up if necessary.

Junior Ryne Stanley led the Aggies in Game 1 by going 2-for-4 with two runs scored and an RBI. Senior RHP Tim Luth (5-1) picked up another win after pitching five innings giving up two runs, six walks and five hits. He also recorded four strikeouts. Senior RHP Leon Hunter (5) got the save.

Luth and junior right-hand reliever Evan Gates pitched themselves out of numerous NCCU scoring threats to help the Aggies hold on to a 5-2 lead going into the eighth inning. But the Eagles mounted another threat in the eighth.

Vinny Bailey opened the frame against Gates with a double to the deepest part of center fielder. Timmy Fischvoght looped a single to center field to put Eagles on the corners with one out. Nick Fajardon then hit a slow groundball to junior Zach McLean that allowed Bailey to score to cut the Aggies lead to 5-3.

Josh Brammell kept the Eagles momentum going by hitting a deep flyball to left-center field for an RBI double to score Fischvogt to make it a one-run game. Gates got Caleb Coyle to ground out to end the threat.

The Aggies did respond to the Eagles comeback overtures their half of the eighth thanks to a two-out rally. Freshman Donte Wade walked on a 3-2 pitch before stealing second. Junior Dustin Baber then came up with a clutch hit to left field to score Wade to give the Aggies an important insurance run and a 6-4 lead.

NCCU had to face Hunter in the ninth where they put two runners on against the Aggies save leader. But one of those runners, Trey Maslin was eliminated from the basepaths on a fielder’s choice where Maslin was forced out at second. Hunter did walk Myles Coston put runners at first and third for the Eagles with two outs. But Hunter got Fischvoght to fly out to left to end the game.

The fun started when Jason King reached on an error and Stanley got on with a bunt single. A sacrifice bunt by freshman Tony Mack moved both runners into scoring position for Wade who doubled down the right field line to score King and Stanley to cut NCCU’s lead to 6-3.

Baber followed with a double to left field to score Wade to get the Aggies to within two. NCCU starter Ryan Miller retired the next two Aggies to end the threat.

Unfortunately, N.C. A&T could not get any closer. Junior Camden Williamson opened the Aggies sixth with a leadoff double, but the Aggies could not get him across the plate. Mack had a leadoff single in the seventh but did not score. In the eighth, Dawnoven Smith led off with a double but again the Aggies left him stranded. N.C. A&T went down in order in the ninth.

Junior RHP Michael Johnson (4-4) got the loss despite giving up only two earned runs. Miller (5-2) was credited with the win and Chris Kernen (1) got the save.

Stanley and Smith were 2-for-4 with a run scored for N.C. A&T. The Aggies step outside of conference play this week to face Liberty in a three-game series starting Thursday.