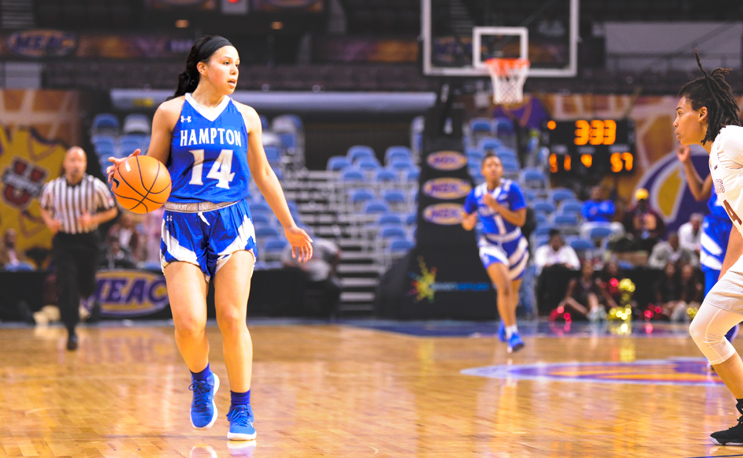 Hampton women claim Player of The Year, Defensive POTY, Freshman of the Year and more in first Big South season.

Bates (Hopkins, Minn.) tops in the Big South with 17.7 points per game as well as 4.4 steals per game — good for third in the nation — and also ranks second in free throws made (117) and eighth in field goal percentage (46.5 percent).  Bates scored a career-high 34 points in the regular-season finale against Winthrop on March 9, tied for the league-lead with nine games with 20+ points, and scored in double figures in every game in 2018-19.  Defensively, her 122 steals are a Big South single-season record and third-most in NCAA Division I this year.  She had nine games with at least six thefts — including four games with seven, and grabbed at least seven rebounds in a game seven times. Bates also recorded more steals than turnovers in 18 contests in 2018-19.  In Big South games, Bates led the league with 18.2 points per contest — the only player above 17.0, and averaged 4.5 steals against conference foes.

VanArsdale (Powder Springs, Ga.) leads all Big South freshmen in scoring at 15.8 (fourth overall), and has made a league-best 130 free throws.  Her 78.3 free throw clip is seventh in the conference, and she also ranks eighth in steals (2.0), 10th in assists (3.0) and is the only freshman player among the Top 15 in field goal shooting.  VanArsdale scored a career-high 33 points vs. High Point on March 2, and had 29 in Hampton’s win over CAA regular-season champion James Madison on Nov. 20.  She tied for the league-lead with her nine 20-point games.  Against Big South competition, VanArsdale averaged 15.7 points (4th), made 82.1 percent from the charity stripe (4th), handed out 3.2 assists (T-9th), and tallied 2.3 steals (6th). VanArsdale received eight first-place votes and 44 total points, ahead of Campbell’s Lauren Carter (two first-place votes and 30 points).

Lupoe (Phoenix, Ariz.) went over the 200 career blocked shots mark on her Senior Day with two against Winthrop to now sit at 201.  She leads the Big South in blocked shots (2.6 per game) and has been ranked in the top 20 nationally all season.  She’s had four games of five or more blocked shots while ranking fifth in big south in FG% (.465).  Lupoe had a season high 22 points vs. High Point and is also ranked 11th in the conference in rebounding (6.5).

Holit (Charlotte, N.C.) holds a 3.6 GPA in computer science and is currently leading the Big South in assists at 5.0 per game along with 8.7 points per game.  In conference, she’s raised her averages to 10.7 points and 6.2 assists per contest.

Hampton returns to action on Thursday night in the Big South Conference quarterfinals when they’ll face the winner of Tuesday’s first round matchup between #6-seed Campbell and #11-seeded Longwood at 8 pm at High Point, N.C.