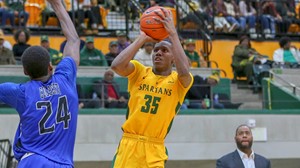 Norfolk State is off to a 4-0 start in the MEAC and Derrik Jamerson has the hot hand.

NORFOLK, Va. – Norfolk State has been hot to start MEAC play and senior guard Derrik Jamerson Jr. has been a big part of the warming trend.

NSU is currently 4-0 in the MEAC after beating BCU on Monday night. Jamerson came up with a career game on Monday, earning the MEAC’s Player of the Week Award on Tuesday afternoon when the conference office announced its men’s basketball weekly honors.

Jamerson scored a career-high 26 points with five rebounds in Monday’s 75-68 win over Bethune-Cookman at home. He hit 7-of-10 3-pointers, also a career high and one off the school record of eight.

He contributed a double-double in Saturday’s 80-66 win at Coppin State as well, his second double-double of the season. Jamerson totaled 13 points and 11 rebounds against the Eagles, knocking down 3-of-6 from long range.

For the year, Jamerson is averaging 10.6 points and 4.3 rebounds while shooting 48.5 percent from deep and nearly 50 percent overall.

It marked the second time this year an NSU player won the MEAC Player of the Week award after Nic Thomas shared the honor on Dec. 4. It was also the fifth weekly award handed out to a Spartan player this year by the conference.