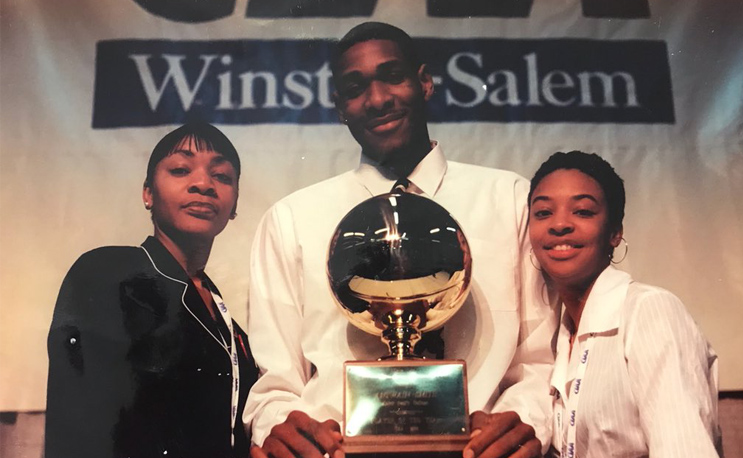 The 2019 John B. McLendon CIAA Hall of Fame Induction Ceremony will take place on Friday, March 1, 2019 at 9:30 a.m. in the Charlotte Convention Center.

The CIAA recognizes inductees for their excellence in the CIAA, significant contributions in the community, leadership in CIAA sports and commitment to the CIAA mission. The induction ceremony is a part of the ancillary events surrounding 2019 CIAA Men’s and Women’s Basketball Tournament that will be held in Charlotte, North Carolina from February 25 – March 2, 2019. Tickets to attend the breakfast may be purchased online.

In 1981, Dr. Simmons became President of St. Paul’s College where he served until 1985 when he was named President of Virginia Union University (VUU). During his 14-year tenure at VUU, he is credited for outstanding fiscal management and endowment building. Dr. Simmons’ strides initiated VUU’s Criminal Justice Program, restored several campus facilities, and build a new library.

Dr. Simmons earned his undergraduate and master’s degrees at NCCU and a Doctor of Philosophy degree at Duke University. He was awarded an Honorary Doctorate of Humane Letters from NCCU and an Honorary Doctorate of Law from VUU. He also served on the boards of North Carolina Central University and Virginia Polytechnic Institute & State University. Dr. Simmons passed away in July of 2014 and will be recognized posthumously.

Thomasina Cunningham | Hampton University | Track & Field
Thomasina Cunningham was one of the CIAA’s top women’s track and field athletes from Hampton University (formerly Institute), 1981-84. As a freshman, Cunningham won the CIAA Indoor and Outdoor Track and Field 100m Hurdles, Outdoor Long Jump, and was a member of the Outdoor Sprint Medley team. That year it was no surprise when she earned Rookie of the Year and Hampton Institute Track and Field MVP. Cunningham added three more CIAA championship trophies to her case: Outdoor 100m Hurdles (1984) and Outdoor Long Jump (1981 & 1984).

Antwain Smith | St. Paul’s College | Basketball
Antwain Smith was a four-year basketball letterman at St. Paul’s College, where he holds the school record in career steals (120) and is the second-highest career scorer with 2,056 points. In 1996, Smith earned CIAA Rookie Team and All-Conference honors. The forward continued to excel in his collegiate career, earning All-CIAA accolades during each year of competition as well as All-Tournament Team recognition. Smith is the only player in conference history to be named Player of the Year for three consecutive seasons (1997-1999). During his college career, Smith was also named Most Valuable Player of the 4th Annual National Car Rental Black College All-Star Classic Portsmouth Invitational.

Eric Moore | Fayetteville State, CIAA | Supporter
Eric Moore is an established figure in sports information and credited for his impact and preservation of CIAA history and statistics over time. Moore started his career at Fayetteville State University in 1984, which allowed him a clear vantage point and grounding for his career as a consultant for the conference office. There he assisted and lead the initiative of updating technology and communications needs, including the development of the league’s internet presence.

Moore continues to serve as a resource, guide and mentor to many sports information directors within the CIAA and across the NCAA, providing instruction and concepts surrounding statistics and best practices for communication. Over the course of his career and still today, he provides statistical services at a variety of CIAA contests including at conference championship events.

Moore continues to serve as an industry leader as the Executive Director of the Black College Sports Information Directors’ Association (since 2001).

John Lockett | St. Augustine’s University | Basketball
John Lockett was a top scorer and rebounder in the CIAA as a member of the Saint Augustine’s University men’s basketball team. The 6’4” forward/guard averaged 27.8 points and 14.9 rebounds per game during his two-year career with the Falcons. As a senior, he averaged a team-high 27.4 points per game. After his season performance in 1967, Locket earned All-CIAA team honors. Lockett was inducted in to the Falcons’ Hall of Fame in 2004.

LTC Robert L. Weeks, Sr. | Winston-Salem State University | Football
LTC Robert L. Weeks, Sr. was a four-year letterman in football at Winston-Salem State University (WSSU). Weeks became the starting center on the Rams’ offense after the third game of his freshman year and never relinquished his starting role for the remainder of his time on the team. He started 40 consecutive games during his career at WSSU and was selected co-captain of the offense in 1976-1977.

James “Jim” Burch | CIAA | Official/Coordinator of Officials
Jim Burch is well-known in the CIAA for his nearly 60-year service as a basketball official and Coordinator of Basketball Officials. Burch began his career as an official in 1959, breaking down many barriers in officiating during a time of segregation and integration. Burch was a trailblazer becoming the first Black game official in the Atlantic Coast Conference (ACC) in 1969. Throughout his career, Burch has officiated in the CIAA, ACC, Mid-Eastern Athletic Conference (MEAC), and Southern Conference and has worked 14 National Collegiate Athletic Association (NCAA) tournaments. He has trained and mentored hundreds of officials over the years, many who have gone on to careers in the CIAA, ACC, Southern Conference and NCAA championships.

Burch was a two-sport athlete and a 1949 graduate of Fayetteville State University, where he would later serve on the board of trustees. He established the James T. Burch Scholarship to recognize student-athletes who exemplify the qualities of academic excellence, involvement in public service, and love of athletic competition.

Burch has been inducted into seven halls of fame, including the CIAA Officials, MEAC Officials, NCHSAA, Fayetteville State Athletic, and South Atlantic Conference. He also served as the basketball coordinator for the Southern Conference for 17 years. Burch was featured in the NCAA Champions Magazine in 1994 and 2014.

Mr. Burch retired from his position as CIAA Coordinator of Basketball Officials in June of 2018.