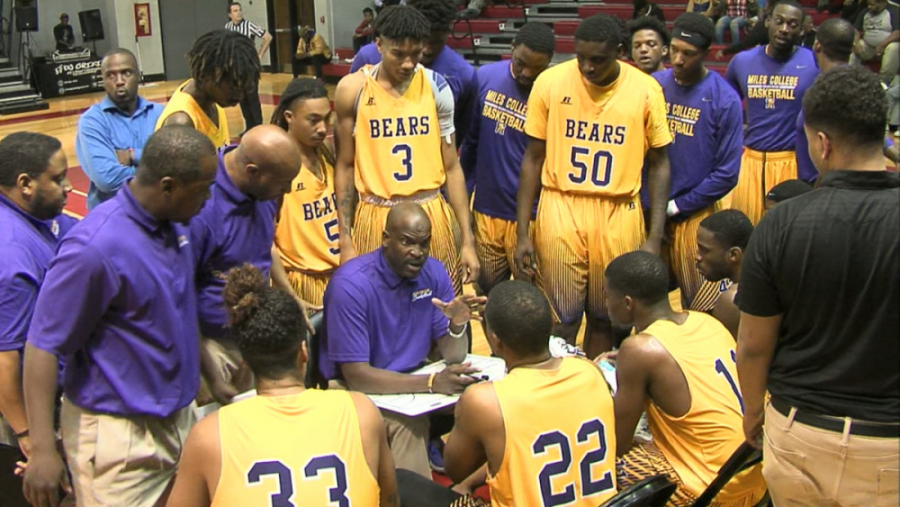 Fred Watson has Miles headed in the right direction.

ATLANTA–It didn’t take Fred Watson long to make his mark at Miles College. On Monday night the Golden Bears (2-2) thoroughly beat No. 11 Morehouse College (4-1) at Forbes Arena 81-63. The victory capped off a 2-0 weekend in the AUC for Miles, after beating Clark Atlanta on Saturday 56-53.

Watson is in his first year at Miles after a long tenure at Benedict College. The Golden Bears started the season 0-2 but hit a bit of a groove this weekend. Watson is no stranger to pulling off upsets at Morehouse, in the 2016-17 season he coached a four-overtime victory over the Maroon Tigers.

On Monday night Miles was able to neutralize one of Morehouse’s top scorers, James Walker. The senior guard was held to just two points in 21 minutes of action.  Miles was led by Devante Fuller, who played his best game of the year so far. He had season-high totals in points (18) three-pointers (3) and rebounds (7).

The Golden Bears led at the break 36-30 and outscored Morehouse by 12 points in the second half.

While it’s still very early in the basketball season the trip to Atlanta should be encouraging for the Miles faithful. Watson led the team back from a double-digit deficit at Clark Atlanta on Saturday before Monday’s upset. Watson is undoubtedly one of the best coaches in the SIAC based on his time at Benedict, and he should improve mightily on last season’s 7-20 record at Miles.  During his 16 years as Benedict’s coach, Watson’s teams won five SIAC Tournament Championships and five SIAC regular season championships.

The Golden Bears have nine more games on the schedule between now and the end of the year, two of those being exhibitions against Little Rock and Jackson State. It’s possible they could win more games by Christmas than they did last year alone, but again the season is young.

Morehouse won’t be the last unbeaten team in college basketball this season, but Monday night is no indictment on its season. A small crowd on a cold Monday night lends itself to these type of outcomes during a season. Monday night Miles was just the better team. Morehouse will have plenty of time to recoup, they only play three games for the next three weeks. A trio of Saturday games begins this weekend with a trip to Raleigh, NC to play Saint Augustine’s University.