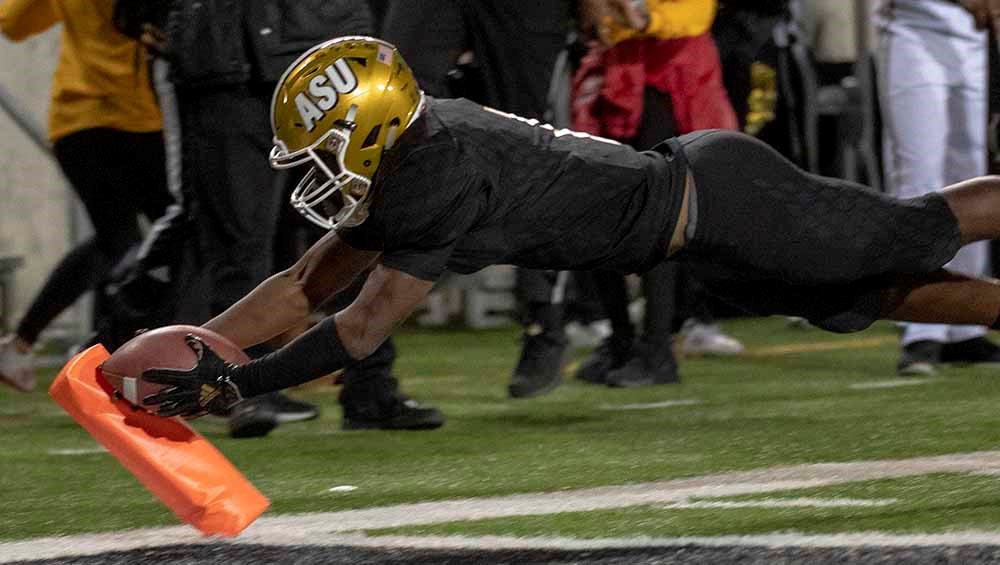 MONTGOMERY, Ala. | Alabama State celebrated Senior Day at the 95th annual Turkey Day Classic at their annual homecoming contest, and Dennis Roberts IV sent the Hornets out on a winning note with a sack of Mississippi Valley State quarterback Dejerric Bryant on the final play of the contest.

The sack ended a 10-point fourth quarter comeback that resulted in the third overtime victory of the season for the Hornets, this one a 31-24 victory over Mississippi Valley State in a Southwestern Athletic Conference (SWAC) contest to close out the regular season.

Alabama State (4-7, 3-4 SWAC) trailed 24-14 entering the fourth quarter when Daymon Williams forced a fumble by Bryant on the first play of the quarter. The Hornets wasted little time in getting on the board, using just two plays to pull to within three at 24-21. Alabama State used a run by KHA’Darris Davis – along with a personal foul on the Delta Devils – to get inside the 30-yard line, before the redshirt sophomore lofted the ball to the back of the end zone to Joe Williams IV for a 27-yard touchdown.

The Hornets tied the game at 24-all on a 33-yard field goal by Hunter Hanson to tie the game at 24-all with 1:55 remaining in the contest, before Kimar Martin recorded his first interception of the season to give Alabama State the final possession of regulation.

Alabama State got the opening possession of the overtime period, and faced a third and eight when Davis hit Jeremiah Hixon over the middle for a 17-yard gain to set the Hornets up first and goal at the six. The Hornets scored on the next play when Hixon took a flip from Davis and dove for the pylon and the go-ahead score, with Hanson providing the extra point for the 31-24 lead.

On the ensuing possession, Mississippi Valley State lost yards on their first two plays from scrimmage before a penalty pushed them into a third and 15. After an incomplete pass, Roberts chased down Bryant for the final sack as the horn went off to give the Hornets the win.

Davis led Alabama State offensively with 237 yards passing on 21-of-39 with a career-high four touchdowns, including a pair to freshman Michael Jefferson. Williams finished with a game-high five receptions for 56 yards, while Tallesin Farmer added four for 39 yards. The Hornets were held to just 49 yards rushing, however, they were able to gain 286 yards of total offense in the win.

Roberts and Darron Johnson combined to lead Alabama State with nine tackles, while Kurron Ramseyand Malik Bridgers – both playing their final game – finished with eight each. Alabama State finished with a pair of sacks and 12 tackles for loss, while forcing four turnovers – including three interceptions.
Alabama State took the lead in the first quarter on a 22-yard pass from Davis to Jefferson with 7:02 remaining in the opening quarter, before Mississippi Valley State tied the game at 7-all on a three-yard run by Isaiah Robinson with 2:40 remaining in the first quarter. The Hornets used another Jefferson touchdown, this a three-yard pass from Davis to take a 14-7 lead with 8:35 remaining in the half, before Mississippi Valley State tied it on a Robinson two-yard run with 5:04 to play in the half.

Bryant, despite three interceptions, finished the day with 157 yards on 27 carries.