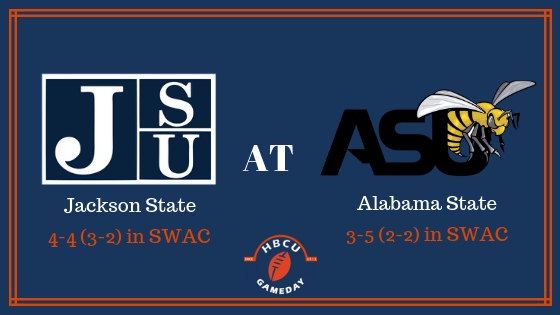 JACKSON, MS–Timing is everything and teams that withstand the “test of time” when undergoing setbacks and tough losses never stay down for long. Nearly two weeks ago, Jackson State was coming off a disastrous 41-7 loss to Southern and fired then head coach Tony Hughes. JSU’s season looked as if it was in jeopardy of going the way the last two seasons where the Tigers finished 3-8.

Even with the drama surrounding the firing of their coach and what looked like a for sure downward spiral of a season, the Tigers were still in a position to compete, despite all odds against them. With their backs against the wall facing a huge mountain of adversity, the Tigers responded and rose to the occasion, knocking off Prairie view 34-28 to remain in the hunt for a chance to play in the 2018 SWAC Championship game.

John Hendrick, the Tigers interim head coach, said his players responded well to the adversity with a much-needed victory over a Prairie View team that had beaten JSU in the last two meetings.

“It’s good for confidence,” Hendrick said. “They started the game with a lot of energy and we have not done that in the past. I think our kids have a lot of confidence right now and I think that it is important for us going forward that every time we get into a football game, we start with great energy in the beginning.”

Playing with a new attitude, Jackson State (4-4, 3-2) faces another test to keep its conference championship hopes alive when the Tigers go on the road to face Alabama State (3-5, 2-2) Saturday afternoon at New ASU Stadium.

Saturday’s game at Alabama State is available on ESPN3 and can be streamed on the Watch ESPN App. Kickoff is scheduled for 2 p.m. #BleedTheeBlue #TheeILove #BeatAlabamaState pic.twitter.com/Ain7jufl2B

However, with two critical SWAC East games left in Alabama State and Alcorn State next week in the Soul Bowl, the Tigers could be on the verge of changing the tide of their season. As for Hendrick and his Tigers, the goal for the season has always been playing for an opportunity to compete for a conference title.

“When I first took this job, someone asked me about going forward having an opportunity to be in the SWAC race,” Hendrick said. “You know, I mean if you do not have that as the forefront of your mind, you do not have enough warm blood coursing through your veins.”

That “warmblood” and lifeline for the Tigers will be tested against an Alabama State team riding high off of a 30-21 victory over Texas Southern. Statistically, the Hornets are near the bottom half of the conference in most offensive categories.

While the numbers may not be high, the Hornets are still very much a dangerous team with a playmaker in sophomore dual-threat quarterback Kha’Darris Davis.

Davis – who recorded 275 yards of total offense and three touchdowns against Texas Southern – has thrown for 560 yards and four touchdowns (7th in the conference in passing yards) and leads the team in rushing with 130 yards on 51 carries and a touchdown.

The Tigers’ defense — a unit that sits fifth in scoring defense (allowing 24.8 ppg), third in total defense (336 yards ppg), third in rush defense (136.2), seventh in pass defense (199.8), fourth in the FCS in red zone defense – will have their hands full in limiting Davis’s production.

Special teams have been a hotbed for success for the Hornets, something that has been an issue for the Tigers at different points this season. Spencer has recorded 107 yards in six kickoff returns (6th in the SWAC) while Hill has tallied six punt returns for 95 yards (2nd in the SWAC).

Gray ranks sixth in all-purpose yards, recording 225 rushing yards and 26 receiving yards an averaging a total of 96.7 per game.

However, Alabama State has struggled to keep drives going as the Hornets rank ninth in first downs (17 per game) and eighth in third-down conversions (going 4-of-12 against Texas Southern), something that could be in favor for the Tigers come out strong and sustain their level of play for the entire game.

Against Prairie View, Jackson State put together a solid all-around performance that many had not seen all season, starting with the play of its offensive line that allowed for 335 yards of total offense and a stellar performance in the running game with 185 yards and three touchdowns.

“I challenged those guys early in the week and said you’re the same offensive line that blocked Southern Miss,” Hendrick said. “So, if you can block Southern Miss out of the upper-level Division I schools surely you can bock from anywhere else. Hopefully, we will continue on that trend.”

The dominant performance by the offensive line allowed senior quarterback Jarrad Hayes to throw for 150 yards and a touchdown on 17-for-27 passing.

On the ground, running back Jordan Johnson – who ranks sixth in the SWAC in rushing yards – led the Tigers in rushing with 74 yards, just a little less than his per game average. In the game versus Prairie View, Johnson sustained a lower leg injury and was listed as day to day as he continues to go through rehab.

But, as the victory over the Panthers showed, the Tigers have a plethora of secret offensive weapons and depth at the running back position with the “Brown” boys: Quitten Brown and Juavon Brown. The two combined for 117 yards and two touchdowns and pulled off some huge runs in the second half that helped the Tigers secure the victory.

“I’ve always thought we had more than one or two backs on this team,” Hendrick said.

“I coach against them every day. So, as we go forward, it will be revealed the talent that we have on our offense because we have some guys on our offense that can make plays in the receiving core and the running back core. We just need to make sure that we do a good job of identifying what situation to put them in.”

It will be important for the Tigers’ offensive line to put together another solid performance that allowed the offense to convert 7-of-14 third-down conversions, a perfect 5-of-5 in red zone scoring and 19 first downs against the Panthers.

“We have to start the game fast and finish the game strong,” Hendrick said. “We have to be more consistent on special teams and make sure we are playing efficiently on both sides of the ball.”

And the Tigers will get the opportunity to do so against an Alabama State defense that will be looking to cause disruption and build on its performance last week that recorded two interceptions against Texas Southern. The Hornets rank seventh in scoring defense (26.8), seventh in total defense (405.3), eighth in rush defense (211.5), third in pass defense (193.8) and 14th in FCS in red zone defense.

Past records look more favorable for the Hornets but Saturday’s game will determine the winner. While many players will play with lots of emotion and the pressure of a big game on the line, Hendrick said he is not really worried about the pressure factor of the game.

“All pressure comes from within inside you. I am not going to put any pressure on them because as long as we play hard and have fun playing football, we’re going to be fine.”

If JSU pulls off another win, the Tigers will need one final over Alcorn in the Soul Bowl to punch their ticket to the SWAC title game.