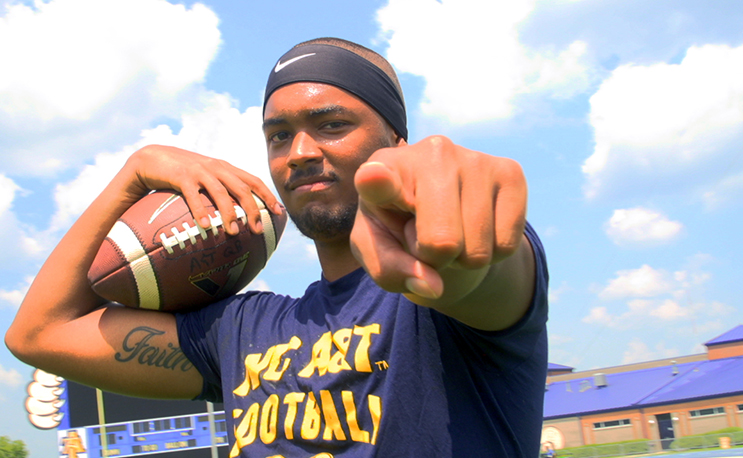 The following is an article written by North Carolina A&T’s John Davis, a long snapper on the football team.

College football season brings out different types of excitement in all of us. Equipment managers roll out dusty shoulder pads from storage, fans purchase season tickets, and coaches send out their pre-season all-conference and all-American lists to their respective conferences.

Most of these players consist of superstars like lightning-fast defensive backs and nimble-footed receivers. Quarterbacks and running backs lead the pack along with the big linebackers that take on the blocks of gigantic lineman. Even the punters and kickers get public recognition. However, there is one position that more often than not goes unnoticed, but here’s the catch. If you do notice this player on the field, then that means something must have gone terribly wrong.

Out of Sight Out of Mind

Long snapper is one of the most wildly recruited positions in college football. They attend national showcases and earn full scholarships just like the hotshot quarterbacks. They get every perk every other position gets except media coverage and public appreciation. Especially in the Mid-Eastern and Southwestern Athletic Conferences.

Like it’s counter-part positions of kicker and punter, the long snapping position is primarily dominated by Caucasian athletes. While this is understandable as to why the Historically Black Conferences known as the MEAC and SWAC do not include these positions in their all-conference selections, it is still unacceptable. Of the eleven MEAC teams in 2017, seven of them had black long snappers. Of the ten SWAC teams in 2017, only four of them had black long snappers. This is 11 out of 21 black long snappers collectively in the two largest HBCU conferences in the United States. Only seven of these 21 teams actually had long snapper as a listed position on their rosters.

I was blessed enough to be one of the very few African-American long snappers in the country. I even earned a scholarship and starting spot at North Carolina A&T where I would go on to play as a true freshman in the Celebration Bowl in Atlanta, Georgia and win two beautiful rings. It was the experience of a lifetime and I put my heart on the line each and every game. But as the list of the top players in the MEAC came out at the end of the season, I was astounded to find out that the position that my friends and I put our blood, sweat, and tears into was nothing more than a ghost to the selection committee. To make matters worse, the SWAC conference made the same decision to exclude the position of long snapper as well. I was just confused as to how the kicker and punter could be on the list but the long snapper is not. Do the fans and media believe that the ball just magically teleports back to the holder and punter?

I am willing to wager that none of the fans in Aggie Land aside from my teammates and family know who I am. I wear the gold and blue number 51. I started all 12 games just like Lamar Raynard and Franklin McCain, and I fought for every second of playing time in summer camp. How could that go unnoticed? But then I began to remember that the better I play, the less I am remembered. It is both a blessing and a curse but I just could not see my fellow snappers go without recognition any longer. My call to action is for the MEAC and SWAC conferences to add the position of long snapper to their all-conference lists.

In case they do not know the criteria to search for in this position, here are a few: Spiral of the ball, accuracy of the ball, the speed of the ball, and tackles down the field. Maybe someday the hard-work of this beautiful position can be perceived as the work of art that it is.