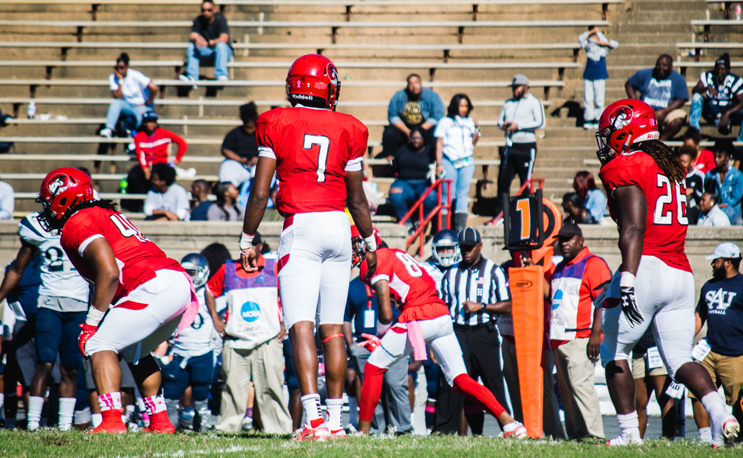 True freshman Dominique Graves had the WSSU offense up and running against St. Aug on Saturday.

WINSTON-SALEM, NC — It looks like the third quarterback was the charm.

Winston-Salem State got a big game from true freshman Dominique Graves and three big turnovers from the defense to come up with a 36-6 win over St. Augustine’s University on Saturday.

Graves, a freshman from High Point, threw for one touchdown and ran for another for the Rams in just his second collegiate start. He’s the Rams third starting quarterback this year, but if he keeps playing like he did Saturday, the merry-go-round might be over.

WSSU got off to a 17-0 start in the first quarter thanks to two St. Aug turnovers. It started with a Jeremiah Miller fumble that turned into a field goal and continued with a Jayron Rankin pick that led to a four-yard touchdown run for Kerrion Moore. The key play that drive was a 70-yard connection from Graves to Quincy Jackson on a free play thanks to an off-sides.

Graves would end the first quarter run with a 41-yard scamper across the field to give his team a three-score lead.

SAU would respond with a short touchdown run by Miller early in the second to cut the lead to 17-6, but that was as close as it would get. WSSU added another score before the half, a 12-yard pass from Graves to Jonathan Allen that made it 23-6 heading into the half.

The passing game continued to move the ball in the second half, as Jackson finished with five catches for 175 yards on the day. Moore scored two second-half touchdowns to complete the scoring.

Graves went 15-for-19 passing for 311 yards and also added 47 yards on the ground to help the Rams win their second game in a row.

WSSU’s defense held St. Aug to just 78 yards passing and picked off three passes. Senior Pat Green led the way with 10 tackles for WSSU, who improved to 3-3 overall, 2-2 in the CIAA and 2-0 in the Southern Division. It will host Livingstone next weekend in its homecoming game.