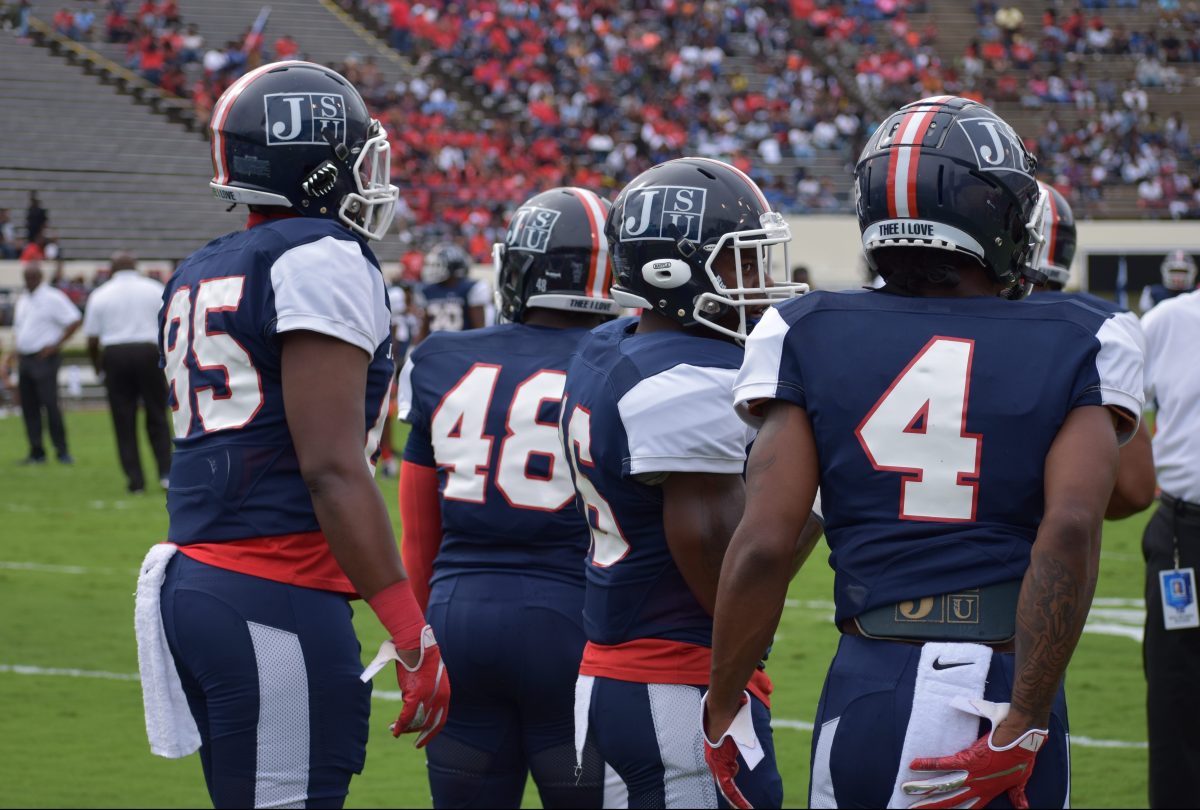 It’s Homecoming in Jackson on Saturday.

Whether sitting atop or looking up from the bottom in the Southwestern Athletic Conference standings, when two bitter in-state rivals match up against each other, records often do not hold much weight in determining the team that will win the game.

When Jackson State takes the field for its homecoming game against Mississippi Valley, this year’s edition of the rivalry will not be much different.

“Their record is not indicative of the way they play,” Tigers coach Tony Hughes said in the press conference on Monday. “They run the ball very efficient. Their offensive line is playing really well, they’re coming off the ball, they’re playing with a lot of confidence.”

“Their defense is solid. Their coverage schemes are solid and they’ve got two of the better corners in the conference.”

With just over 100 miles separating the two Mississippi schools, MVSU (0-4, 0-1) has yet to win a game this season. The Delta Devils — under former JSU head coach Rick Comegy – would love to ruin the Tigers’ homecoming and earn a critical conference victory with toughest stretch of the season coming in to play.

Saturday’s game is an important one for the Tigers as they are currently tied for second in the division with Alabama State. Alcorn State and Alabama A&M are tied for first place.

MVSU’s last victory over Jackson State happened in 2014 when the Delta Devils rallied from a 17-6 third-quarter deficit to defeat the Tigers 27-23 in Jackson.

But, anything can happen.

As for JSU, the Tigers will look to build on their momentum, coming off a 30-27 victory on the road over Arkansas-Pine Bluff thanks to a 72-yard touchdown pass from quarterback Jarrad Hayes to Warren Newman.

Jackson State (2-2, 1-1) enters the game as a heavy favorite, holding a 57-6-2 all-time advantage against MVSU and having won 23 of the last 24 meetings. The last time the two teams met, the Tigers dominated the Delta Devils 24-5 in Itta Bena, despite struggling to convert on third downs, committing turnovers and making some careless mistakes. The victory gave JSU its first win of the season.

And on Saturday – instead of searching for its first win overall – the Tigers will instead look to win their first SWAC East matchup after blowing a 16-0 lead and losing at home to Alabama A&M 21-16 on Sept. 29.

Jackson State enters the game ranked fifth in the conference in total offense, averaging 23 points per game, 309 yards of offense with nearly 189 coming in the passing game and just over 120 in its rushing attack.

Under interim offensive coordinator Derrick McCall and quarterback Jarrad Hayes, the Tigers struggled to establish an offensive rhythm early on against UAPB but it eventually came to fruition as Hayes threw for 247 yards, two touchdowns, and two interceptions.

JSU’s ground game also did its part to lead the Tigers to a victory behind the rushing tandem of Keshawn Harper and Jordan Johnson, who combined for 156 yards on the ground a week ago.

Against an MVSU defense that is ranked last in scoring defense – giving up 56 points per game to conference opponents – an early and dynamic offensive rhythm could give the Tigers a huge boost on their way to what could be their first victory in the division.

Currently, Jackson State ranks 24th in the FCS in red zone offense and a good part of it comes from the special teams’ unit that has been solid behind the kicker Christian Jacquemin, who has made eight of his nine field goals attempts and ranks fourth in the SWAC.

For JSU, this could be a game changer in determining the pace and time of possession in the game, something the Tigers have struggled with this season.

Mississippi Valley enters the game with the SWAC’s worst scoring offense, averaging 13.5 points per game and 201 yards of total offense, with 168 coming through the air. The Delta Devils feature quarterbacks Chris Fowler and Dejerric Bryant, who threw a combined mark of 90 yards off 13-for-28 passing, a touchdown and four interceptions last week in 41-27 loss against Bethune Cookman.

On the ground, MVSU averages 33 yards per game but compiled 146 against the Wildcats, mainly behind the legs of running back Henry Isaiah Robinson and Bryant.

Friday Setup done. The true definition of Teamwork make the Dream work. Thanks to @MSValleyFB DFO for letting us use his van to transport our Equipment to the school down the road. #WeDoWork #BeatJSU #ForkEm pic.twitter.com/CTF6NpLV5o

For the Delta Devils, they will need to find a balance in the running and passing game to earn a shot at a victory. Wide receiver Steven McIntosh ranks fourth in the conference in receiving yards, while Booker Chambers – the leader in punt returns in the SWAC – has compiled 11 catches and 140 receiving yards this season.

Between Fowler and Bryant, the two must find a way to get the ball in the hands of their playmakers along with having a consistent running game. The Delta Devils are last in first downs (51), seventh in third-down conversions (23.7 percent) but second in fourth-down conversions (57 percent).

Defensively, the Tigers have given up 24 points per game to conference opponents but rank second in the FCS in red zone defense. While teams have moved the ball, they have struggled to score against JSU in the red zone.

If that statistic remains accurate for Tigers on Saturday, the Delta Devils will be in for a long day offensively.

Kickoff is set for 2 p.m. at Mississippi Veterans Memorial Stadium.

412
The Latest in HBCU Sports and Culture