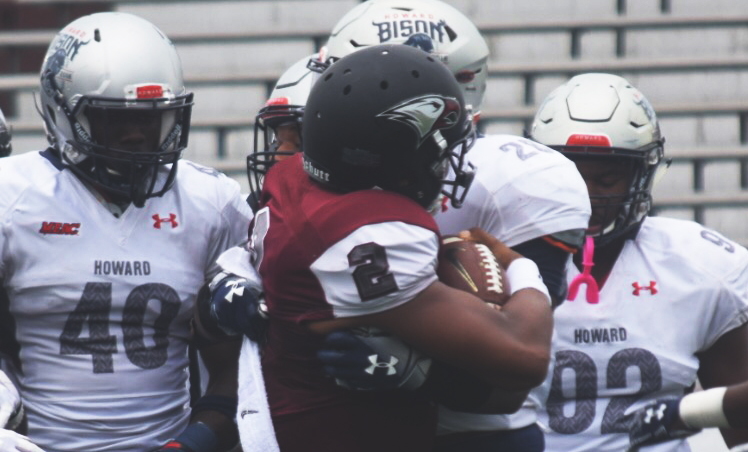 North Carolina Central came out on top over Howard in game that included lots of scoring and big plays.

One week after an ugly loss at home, North Carolina Central got a measure of redemption on the same field.
NCCU scored a late-game touchdown on a run by quarterback Chauncey Caldwell and then came away with a game-sealing interception to beat Howard 40-35 on Saturday.

Caldwell and the NCCU offense had a big day, as he accounted for 464 total yards and four touchdowns, including a three-yard rumble into the end zone that turned into the game-winner with 24 seconds remaining. He completed 24 of 38 passes for 311 yards and three scores through the air.

His score left just enough time for Howard to put together a drive to win the game, and it got close. HU got down to the NCCU 17 but Caylin Newton’s pass was picked off by Marcus Martin, ending the game and Howard’s comeback hopes.

Newton had a big day overall, completing 24 of 39 passes for 381 yards and three scores. Jacquez Ezzard was the recipient of all three touchdown passes as he finished with 174 yards on eight catches. Kyle Anthony led the Bison in receiving with nine catches for 147 yards.

It was a much-needed offensive explosion for the Eagles, who had scored just 28 points in their last two games. They improve to 2-3 as they head into the bye week. The Bison fell to 1-3.