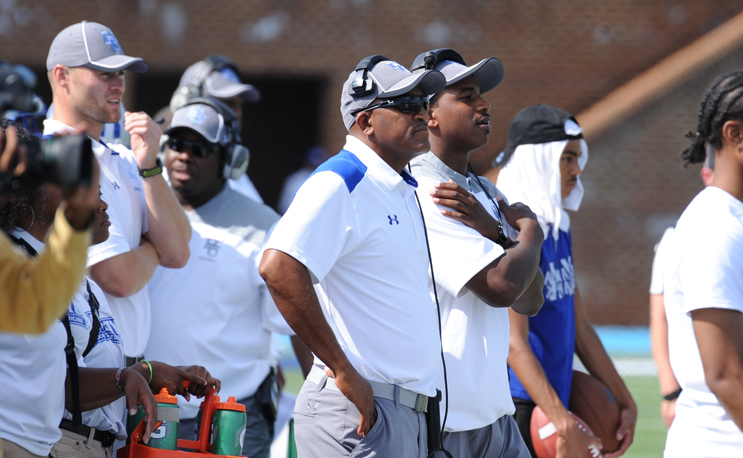 There seems to be new optimism around Alabama A&M early on in Connell Maynor’s tenure.

When the 2017 season ended Alabama A&M found itself for a new head coach for the second time in four seasons after concluding its fifth straight losing season.

AAMU ventured from the SIAC to the SWAC in 1998 and made an immediate impact in the conference and making six SWAC Championship game appearances from 2000-2011, including winning the title in 2006. Things have turned South for the Dogs since the 2012 season which has been A&M’s last time posting a winning record. Since 2013 Alabama A&M has a record of 19-38 and their attendance numbers have been impacted.

Meanwhile in Hampton, Virginia, Connell Maynor was relieved of his duties as the head coach of the Pirates after four seasons at the helm. Maynor was considered by many to be the next great coach in nation as he arrived at Hampton with an impressive 45-6 record and National Championship Runner-up while at Winston-Salem State. Maynor was supposed to be the next Joe Taylor at Hampton, instead after four seasons he was out after a 6-5 campaign.

Now Maynor has found a new opportunity at Alabama A&M and it appears to be a match made in heaven. Maynor needed a redemption and Alabama A&M needed to be revived. Both Maynor and the program that he took over were almost mirror images of one another. Both showed promise and got their respective fan bases excited and then both fell on hard times. For the Bulldogs, Maynor has been a breath of fresh air that has fans believing again!

Maynor made his debut with a 37-0 win over in-state rival Miles College, and followed that up with a five-point loss to North Alabama but even in defeat the way the team competed left Bulldog fans feeling positive about what’s to come. Connell Maynor and his Bulldogs have energized a slumbering fan base and now The Hill is buzzing about football again. A season ago Alabama A&M had one home game to exceed 8,000 fans, so far this year both home games have exceeded 11,000 and the Bulldog Nation showed up in large numbers in Mobile for the Gulf Coast Challenge against Southern.

This year Alabama A&M goes into its sixth game of the season with a record of 2-3 which is the same identical record that they had a season ago but the feeling around the Tennessee Valley and the AAMU program is so much different than last year. AAMU visits Texas Southern this week with an opportunity to pick up a key conference win which would set up a huge game next week against Alcorn State for homecoming. The Bulldogs are currently ranked 5th in the conference in total offense and 2nd in total defense. Sophomore quarterback Aqeel Glass has grown before our eyes under the leadership of Maynor and his staff. Glass has passed for 965 yards, 7 touchdowns and only 3 interceptions so far this season.

The weapons around Glass have improved as well as his 88 completions have gone to 11 different receivers this season including true freshmen Nathaniel Dell, Brian Jenkins Jr., Gary Quarles, and Teon Dollard. These freshmen have made solid contributions and have taken the pressure off of returning playmakers Octayvious Miles, Isaiah Baily, and Marceles Clash. On the ground the Bulldogs have been led by All-SWAC running back Jordan Bentley, Trevon Walters, and true freshmen Gary Quarles and Teon Dollard. The Bulldog rushing attack has averaged 128.8 yards per game on the ground so far this season.

Defensively the Bulldogs are a stout unit lead by linebacker Elijah Timarky and defensive back Rhomel Fields. Coach Maynor’s Bulldogs are ranked 2nd in the league in total defense, 6th against the run and 3rd against the pass. The Dogs limited Southern and Jackson State in their last two conference contest and hope to do the same to a Texas Southern offense that’s ranked 4th in total offense in the league.

Stats aside it’s the way the Bulldogs have competed as well as the young players who have contributed that has Bulldog fans excited. Alabama A&M dominated Southern for a half before letting the game slip away and a week ago they rallied from 16 down to beat Jackson State on the road before a crowd of over 30,000. Maynor said after the Southern game that his biggest challenge was to get this group to believe that they can win and it seems like the Bulldogs started to believe during the second half a week ago.

Now Coach Maynor and crew travel out to Houston to face a TxSU team that is looking to start conference play with a win. This games is critical for both teams as a loss this week would make the task of winning a divisional title a daunting one. If Alabama A&M is to defeat Texas Southern this weekend, it would set up the most important game played in Lewis Crews Stadium since Jackson State in 2012. A win on Saturday would mean that a week from Saturday for homecoming, Alabama A&M would welcome in 4 time Eastern Division Champion Alcorn in a game that would be for 1st place in the Eastern Division.

This is exactly what the AAMU fan base was hoping for when Mayor was hired but most expected this to happen a year or two down the line. A win on Saturday would make this dream scenario a reality and would make this edition of homecoming for Alabama A&M the most anticipated one in years. Maynor is only in game number six as the head man at Alabama A&M but he’s one win away from getting the Bulldogs off of the porch, and a win next week to get them to running with the big dogs!