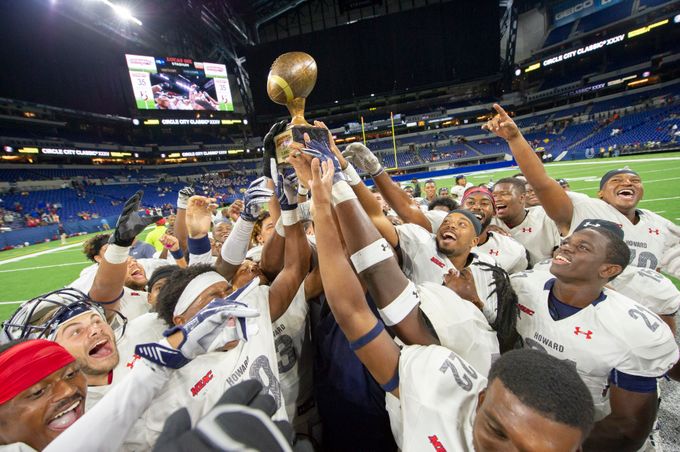 Howard and Bethune-Cookman light up scoreboard at Circle City

Bison get the narrow win in an exciting game.

The Circle City Classic was hoping to resurrect its status with a powerful MEAC matchup between Howard and Bethune-Cookman. Both teams got the memo as Howard (1-2, 1-0) put together a strong third quarter for a 41-35 win over Bethune-Cookman (1-3, 0-1) in Indianapolis.

What a game 41-35 @HowardU Congratulations to both teams!

Caylin Newton threw for two touchdowns while Josiah Crute ran for two touchdowns in this high scoring back and forth game. Newton was 20 of 32 passing for 301 yards and an interception. Crute had 11 carries for 83 yards on the afternoon. Jequez Ezzard had eight receptions for 149 yards and a touchdown catch for the Bison.

The game was tied at 28 points apiece late in the second quarter when a game-changing call was made.  Starting middle linebacker Marquis Hendrix was ejected for targeting after a lengthy review on a punt return.

Cats get hit with targeting on Marquis Hendrix. He is now disqualified for the remainder of the game#BeatHoward #OneDestruction

Howard took advantage in the third quarter when Crute hit a hole directly up the middle and went untouched for a 31-yard score. The Bison put up 13 unanswered points in the quarter, giving them the cushion to secure the victory.

The Wildcats did make it interesting in the fourth quarter. Devin James forced a Howard fumble and Kennedy Ndukwe ran it back 37 yards to the Howard 10. Williams ran in for a score on the next play to make it a six-point game with 5:45 remaining. BCU got the ball back with just over a minute to play, but Tye Freeland intercepted Williams to end the ball game.

Over 19,700 people were listed on the official box score, which is roughly a third of the capacity of Lucas Oil Stadium.

Howard and Bethune-Cookman light up scoreboard at Circle City