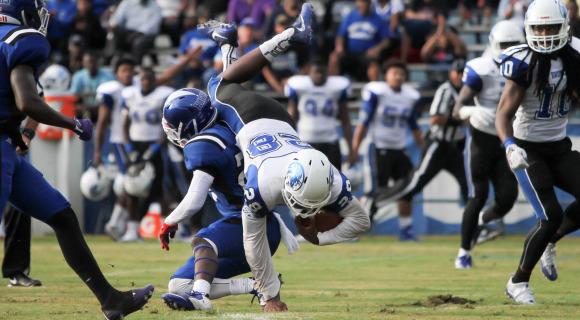 For the second week in a row both Elizabeth City State and Fayetteville State will not play football.

Fayetteville, N.C. – Hurricane Florence had a major impact on the city of Fayetteville, the North Carolina seaboard and the major arteries connected to it.

“I applaud the efforts of campus facilities and those of the surrounding community with the attempt to get things back to normal,” said Director of Athletics Anthony Bennett. “I do not want to put our student-athletes in any dangerous situations with the road closures in trying to return to campus.”

In addition to the canceled football game, Fayetteville State has also pulled its participation in this weekend’s CIAA Volleyball Roundup (Richmond, Va.) and the cross country meet at Wingate University.

Sections of Interstate-95 and roadways within Fayetteville are currently closed due to the flooding of the Cape Fear River, Little River, Cross Creek River and other arteries. Fayetteville State University is expecting the return of students on Sunday, September 23rd.