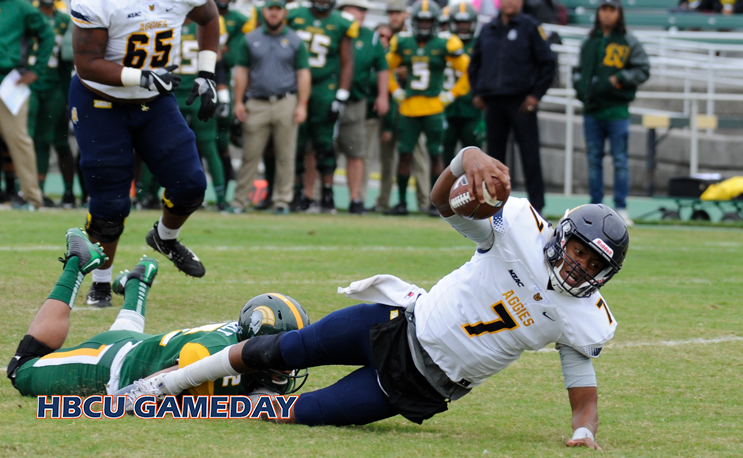 NORFOLK, Va. – North Carolina A&T State University quarterback Lamar Raynard was selected as the Mid-Eastern Athletic Conference (MEAC) Preseason Offensive Player of the Year, while N.C. Central defensive back Davanta Reynolds was selected as the Preseason Defensive Player of the Year. All votes were submitted by the MEAC’s 11 head football coaches and sports information contacts.

Raynard passed for a MEAC-best 2,932 yards and 27 touchdowns en route to an unbeaten (12-0) 2017 season which included a postseason win in the Celebration Bowl. The redshirt senior from High Point, N.C. has compiled a 27-0 record as a starter and led the MEAC in six (6) statistical categories while shattering the Aggie record books as he broke the North Carolina A&T State single-season school records for touchdowns responsible, passing, total offense, touchdown passes and completions in a season. Nationally, Raynard ranked sixth in passing efficiency (140.8), seventh in yards per pass attempt (8.94), ninth in completion percentage (64.6%), 11th in passing TDs (27), 13th in both points responsible for (14.03) and points responsible per game (15.7) and 16th in completion percentage (63.7%).

Reynolds ranked second nationally in interceptions per game (.06) while finishing the 2017 campaign ranked fifth amongst FCS defenders with six interceptions.

The Tucker, Ga. native broke up a pass, returned an interception for a touchdown, recovered a fumble, defended seven passes and forced a fumble which led to an 85-yard fumble recovery for a touch-down. In addition to his success in the secondary, the FCS All-American also finished fourth on the team in tackles with 54 stops and 2.5 tackles for loss.

North Carolina A&T State led the way on the 2018 preseason team with a total of eight first team members and nine players overall. A total of 11 players from Howard University were represented on all three teams while N.C. Central had nine student-athletes selected.