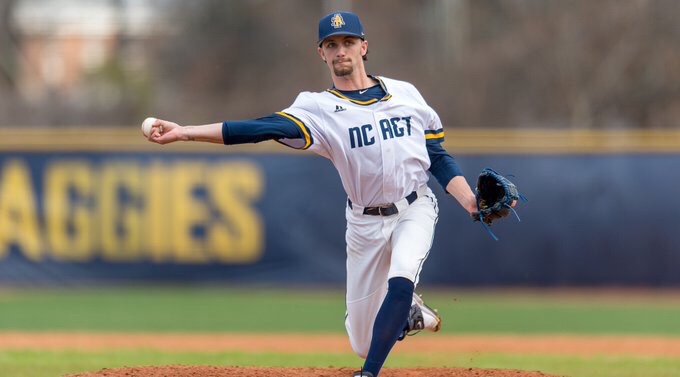 The Aggies will look for their first NCAA Tournament baseball win this weekend.

The Aggies (32-23), who earned the No. 4 seed in the region, were informed of their destination Monday afternoon on ESPNU as the team, fans and parents gathered at the Bryan Fitness and Wellness Center on N.C. A&T’s campus to watch the selection show. Joining the Aggies in the Chapel Hill regional along with the top-seeded Tar Heels are No. 2 seed Purdue and No. 3 seed Houston.  The Boilermakers and the Cougars are scheduled to play at 7 p.m., on Friday.

The Aggies lost at UNC 1-0 in a midweek contest on March 13. There were only 10 hits in the game, six by UNC and four by N.C. A&T. N.C. A&T head coach Ben Hall announced after the selection show that junior right-hander Tim Luth (6-2, 3.55 ERA) will be his Friday starter.

“It’s a great feeling to play in the tournament for the team, for the fans and for the university, so I’m going to go out and do all I can do,” said Luth. “We’re all just a bunch of guys having fun. We all want to play the best that we can and see what happens.”

N.C. A&T opened the season 5-10 but they closed out the season in dominating fashion, going 27-13 over their last 40 games including a 3-0 run through the MEAC Baseball Championship Tournament to win the title for the first time in 13 years. Also in 2018, the Aggies claimed the MEAC Southern Division title, broke the school record for wins and the school record for conference wins (16).

“It’s good when guys get to see the fruits of their labor,” said Hall. “It is another stepping stone. Last year we made the conference tournament for the time in four years. We came close but we came up a little short. We talked about how the next step we take has got to be forward. We took that step, but there is no finish line until you get where you want to be. In my mind, this is just another stepping stone in a growing program.”

Only the top 16 teams are seeded in the NCAA baseball tournament. The Tar Heels (38-18) are the No. 6 seed overall after winning the ACC Coastal Division title. The winner of the Chapel Hill region will advance to play the winner of the DeLand Regional consisting of Stetson, South Florida, Oklahoma State and Hartford).

“We get to focus on Chapel Hill. The rest of it doesn’t factor in,” Hall said when asked what he thought of the region the Aggies were placed in. “It’s about one game and we’re ready to lock in on what we have to do Friday to go out and play our best baseball. It’s a four-team tournament and a one-weekend deal for them to go out and compete at the highest level against some of the best teams in the country.”

The four-team region is a double-elimination tournament. The Aggies are 0-2 in the NCAA tournament all-time after losing to Clemson and Oral Roberts in 2005. The Aggies are somewhat tournament tested after having two other tournament teams on their schedule in 2018 other than UNC. N.C. A&T lost to N.C. State 9-7 in Raleigh on Feb. 20 and they were defeated 12-2 by South Carolina on March 7 after the Gamecocks scored seven runs over their final two at-bats.

Tip my cap 🧢 to the best/most fun/hard working pitching staff I know
Meac Champs ✅
Under 4.0 ERA ✅
Lowest ERA out of all D1 HBCU✅
Lead conference and all D1 HBCU in almost every pitching statistics✅
Find out where we are gonna play at in regionals Monday at 12:00PM on ESPNU pic.twitter.com/WaHWmhHQSW

“We’ve been working toward this for a while now,” four-year senior Adan Ordonez said. “We are a real confident group. We know that we can pitch it, we know that we can swing it and we know that we can field it. There were several different possibilities out there. Once we saw it, it’s like game on. It’s real now. We played them close earlier in the year so hopefully, when we go back we can give them another good fight and win this time.”