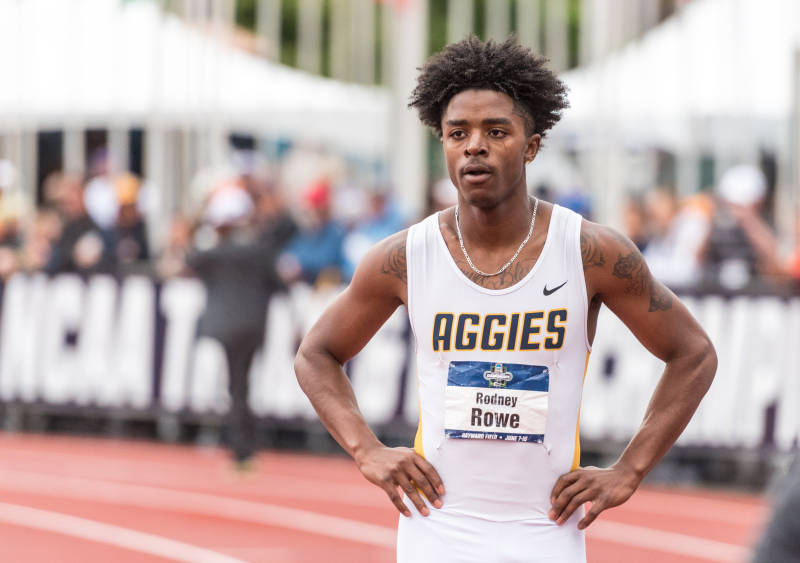 The NCAA championships are June 6-9 in Eugene, Ore. Rowe will head to Eugene with the excitement that he has a legitimate chance at winning a national championship. Rowe ran the fastest 200-meter time at the 2018 East prelims by running a personal-best 20.26. Rowe’s time is the 10th-best in the nation this year and the sixth-best in the East.

Rowe earned first-team All-American honors as a part of the Aggies historic 2017 4×100 meter relay team that has the eighth-best time in NCAA history. Rowe was also a second-team All-American sprinter in the 200m at the NCAA indoor championships earlier this year.

He will compete in the 200 for the first time at the NCAA outdoor nationals after just narrowly missing qualifying in the 100 on Friday.

“Rodney is my leader,” said Duane Ross, N.C. A&T’s director of track and field programs. “He does a great job of leading by example.”

Toppin will join Rowe on the flight to Eugene after placing ninth in the women’s triple with her best leap giving her a personal-best 42-feet, 7 ½-inch mark. Toppin’s previous best was 42-feet 1 ¼-inches at the Florida Relays in late March.

“I’m very happy for Rodney and Anisa. They’ve worked and performed hard all year and they showed up even more when the bright lights came on,” said Ross. “Anisa is a straight gamer. I’m excited to see how she performs in Eugene.”

Once again, N.C. A&T will have strong representation in the relays in Eugene. Rowe is back at nationals in the 4×100. This year he will be joined by senior Joel Thomas, junior Michael Dickson and freshman Michael Bell as the quartet placed seventh on Saturday in 39.21.

The 4×400 relay team is coming to the NCAA championships too. Senior Dajuan Harding, freshman Trevor Stewart and juniors Michael Dickson and Justin Hamilton were sixth at the East prelims on Saturday with a time of 3:06.87. The Aggies are the reigning three-time MEAC champions. Stewart is also going to nationals as a 400m runner.

Things did not go as well for the women’s relay teams. The 4×100 team of senior India Brown, sophomore Tori Ray and juniors Kayla White and Jadzia Beasley was disqualified and the 4×400 team of freshmen Payton Russell and Nia Lundy and sophomores Sun-Sara Williams and Ray finished 20th in 3:39.04.

“Our relays ran well enough to get to Eugene but nowhere near our potential,” said Ross. “Making it to the NCAA’s is what we’re supposed to do, so I’m not jumping for joy over the times and places we received.”