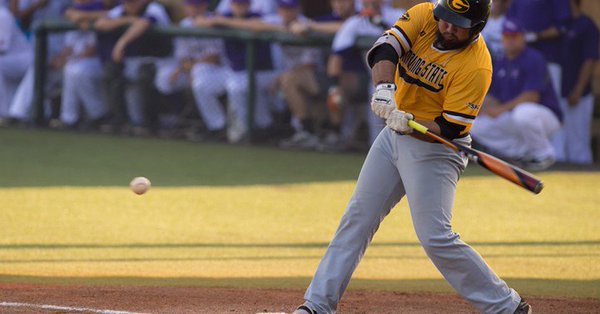 Grambling gets a win when it counts over ASU to make title game.

The Tigers opened the day with a 5-1 loss to Alabama State in a Winner’s Bracket final and then fought off elimination with a 5-1 victory over the Hornets, sending the Tigers into the championship game.

Grambling State will meet Texas Southern in Sunday’s title game, with the game broadcast live on ESPNEWS and the WatchESPN App. at 2 p.m. Texas Southern, the top seed from the West Division, eliminated Jackson State, the No. 2 East seed, in a thrilling 10-9 victory in 10 innings. Texas Southern will be making its four straight appearance in the championship game and have won two out of the last three titles.

GAME 1 (5-1 loss)
In the opener, Alabama State struck first with a run in the bottom of the second to grab an early 1-0 lead.

Grambling State answered with one run in the top half of the third as Ace Felder singled to begin the frame. Trevin Bolden advanced Felder a base on a sacrifice bunt and D’Quan Matthews grounded out to second to push the runner to third. Marshawn Taylor singled to right as Felder scored from third, tying the game at 1.

The Hornets plated two runs on two hits and took advantage of one error in the bottom of the frame to grab a 3-1 lead.

The best opportunity for Grambling State was in the seventh as the Tigers loaded the bases with one out, but Isaiah Torres and Richard Ortiz struck out to end the threat.

The Hornets put the game away with a pair of runs in the eighth to pick up the 5-1 win.

Rafael Ramirez, III reached on a two-out infield hit. Isaiah Torres followed with a two-run shot to left to give the Tigers a 2-0 lead. Richard Ortiz and Garrett Smith drew back-to-back walks and after a pitching change, Felder singled to plate Ortiz as the Tigers grabbed an early 3-0 lead.

The Tigers extended the lead to 4-0 in the sixth when Ramirez belted his team-high 16th homer off the right-field foul pole.

Alabama State cut the margin to 4-1 with a run in the bottom of the frame, but Grambling State picked up one run in the eighth to take a 5-1 advantage.

Matthews opened the top of the eighth with a base hit to right center. He stole second and advanced to third on an error. After an intentional walk to Ramirez, Torres reached on an error by the Hornet left fielder as Matthews scored.