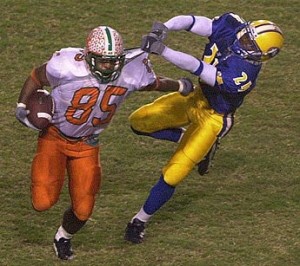 TALLAHASSEE, Fla. — One of the longest standing non-conference rivalries in Black College Football history will be renewed in September of 2019, as the Florida A&M University (FAMU) Rattlers will take to the field against the Southern University Jaguars of Baton Rouge, Louisiana for the first time since 2012.

FAMU and Southern jointly announced the initial home-and-home agreement on Wednesday, which begins with a date in venerable Bragg Memorial Stadium in Tallahassee, Florida, on Saturday, September 21, 2019, followed by the return date at A.W. “Ace” Mumford Stadium in Baton Rouge on September 12, 2020.

FAMU and Southern have met four times on the gridiron since the yearly series was suspended in 2001, once in the MEAC-SWAC Challenge in 2007 and twice in the Atlanta Football Classic in 2011 and 2012.  The last meeting between the Jaguars and the Rattlers on the schools’ respective campuses occurred in 2008, when FAMU edged Southern 52-49 in a high scoring road win in Baton Rouge, La.

“The two-year, home-and-home agreement with Southern University is a “win-win” for both schools,” FAMU Athletic Director John Eason, Ph.D. said. “We are excited about the opportunity of playing one of the most recognized football programs among HBCUs.  It represents our efforts to ignite our fan base with games they want to see.”

“The renewal of this rivalry represents the best of both schools and will spark high interest among our respective fans,” Southern Athletic Director Roman Banks said. “This one is a ‘no-brainer.’ Southern and FAMU should play each other and we’re extremely excited about this development.”

In the previous meeting between the two schools, Dawson Odums led the Jaguars to a 21-14 win over the Rattlers in the Atlanta Football Classic in the Georgia Dome in his second game as interim head coach in 2012.

The two universities began their football rivalry in 1941, and while FAMU enjoys a slight edge in the meetings at 33-26-1, the record is just one part of the rich legacy that these two programs share.

The pair combined have won 22 Black College National Football championships, FAMU 12 and Southern 10 and both rank in the Top 20 all-time among NCAA Division I FCS programs in winning percentage, with both having won more than 64 percent of their games since the 1920s.

The honor roll of stellar luminaries is headed by players such as FAMU’s Bob Hayes, Ken Riley, and Willie Galimore, along with Southern greats Mel Blount, Isiah “Butch” Robertson and Aeneas Williams, as well as legendary coaches A.S. “Jake” Gaither of FAMU, and Arnett “Ace” Mumford of Southern.

FAMU and Southern are also among the perennial attendance leaders in Division I FCS, with both ranking in either the Top 10 or Top 20 over the past decade or more.

Of course this long-standing Black college rivalry would not be complete without the musical complement of two of the greatest marching bands in America – FAMU’s world famous Marching “100” and Southern University’s “Human Jukebox.”