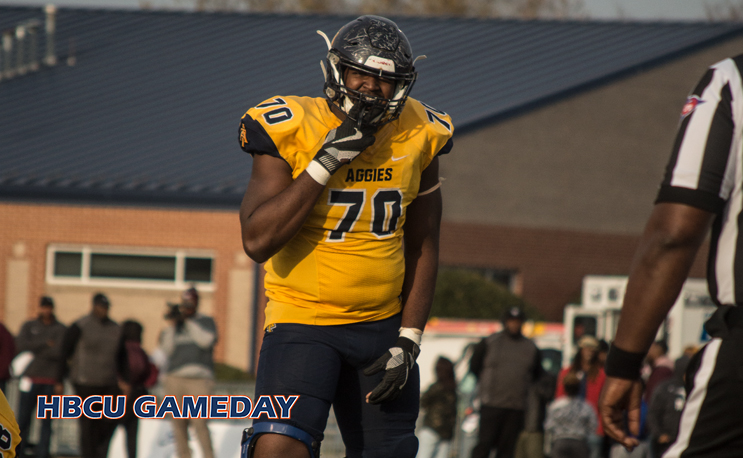 Too big to be a secret, A&T’s Brandon Parker drawing plenty of interest, including the Carolina Panthers.

GREENSBORO, NC — For the second year in a row, North Carolina A&T has the most sought-after pro prospect among HBCUs. Last year it was Tarik Cohen, this year its the guy who blocked for him.

Offensive tackle Brandon Parker was the focal point for more than a dozen NFL teams at A&T’s pro day in Greensboro on Monday, which included 10 of his teammates. The Kannapolis, NC native is a 6’7, 299-pound nimble-footed blocker that has scouts buzzing for quite some time.

Parker put up 21 reps on the bench press as scouts from 17 teams looked on.

21 reps on the bench press for Brandon Parker. Raiders GM Reggie McKenzie among those in attendance. pic.twitter.com/mX2Dewwgtv

Scouts also got an up-close-and-personal look at him in February at the NFL Combine. Slightly under the weather, he wasn’t able to perform the way he wanted in Indianapolis, but Greensboro provided a more comfortable setting.

“There it’s more competition, everybody’s trying to get a job,” Parker told WFMY. “Here, we’re all from one team, so it is a little less pressure here than going at the combine.”

An All-American and the MEAC Offensive Lineman of the Year, Parker helped A&T win 40 games in his four years, including two HBCU national titles. He knows that despite his team and individual accomplishments, he can get better.

Parker says he’s already held workouts for the San Diego Chargers, Cincinnati Bengals, Philadelphia Eagles and New Orleans Saints. He will have one with the Buffalo Bills on April 3, then he flies to New York for a visit with the Giants. The following week he will meet with the Carolina Panthers, the team located less than half an hour from his hometown.

“It would be nice. I try not to entertain because I don’t try to show favoritism, but that would be nice. Especially for the people back home in Kannapolis, they would be rushing to get tickets if I go there.”