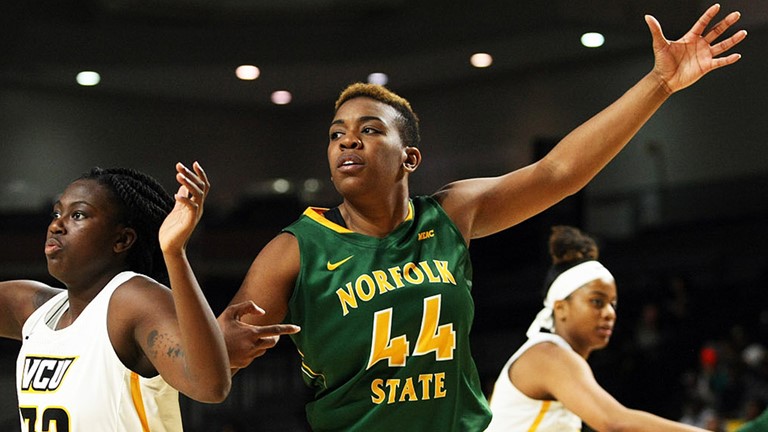 Lowkey, the women’s MEAC Tournament title might end up staying in Norfolk after the tournament.

With under two weeks remaining before the beginning of the 2018 MEAC Tournament, Norfolk State women’s basketball has been a silent assassin in conference play. NSU (16-9, 9-4), deviated from an unfortunately timed three-game losing streak and has since won four-straight conference games in the span of ten days. The hot streak ignited for the Lady Spartans just in time considering conference records are the true determining factor to where the Lady Spartans are placed in MEAC standings.

NSU now has a guaranteed winning record for the 2017-2018 season following their victory over South Carolina State. This victorious stretch of 16 wins is the third most in the NSU D1 era. This season also secures four total winning seasons in MEAC play for the NSU, with two winning seasons coming consecutively as they finished last season 9-7 in conference play.

Head coach Larry Vickers, who is entering his second full season holding the position, notices the growth in the program. In his postgame coach interview following the Lady Spartans 63-49 victory over South Carolina State, Vickers gave recognition of where their program is headed.

“The growth from this program is exciting,” he says, “I thought the second half was more telling of the basketball team that we are: we were on the floor, we got all the 50/50 balls, if we continue to do that, we’ll continue to get more and more wins.”

While proud of the direction the Lady Spartans are going, Vickers stays stern with goals of progression after each game. In his postgame coach interview following the Lady Spartans 63-49 victory over South Carolina State, Vickers takes note of the importance of getting back to the ball.

“We got to do a better job rebounding though when our shot blockers are rotating over…” Vickers says, “we got to kind of get that weak side rebounding showing up.”

Battle on both sides of the ball

To turn a three-game losing streak into an even longer winning streak is no easy task. Considering it’s now the point in the season when everyone is battling to finish strong before the start of the tournament, double said difficulty. It is a task that can only be completed with cohesiveness on both sides of the ball: outscoring your opponent, and making stops. Offense and defense.

Norfolk has been taking care of business on both sides, as junior Khadera Croker made her fifth MEAC defensive player of the week appearance after performances in NSU’s victories over South Carolina State and Savannah State.

Make it 5️⃣ for Khadedra Croker as she picks up yet another MEAC Defensive Player of the Week nod.https://t.co/yfuBBG1RpO pic.twitter.com/eYCtxyhkaB

While having the third-best overall record in the conference, NSU currently is fourth in the division behind Hampton (14-3, 10-4), who doesn’t have as many overall wins, but does have one more conference win. With three games remaining in the season, there is still great possibility for Norfolk State to fight hard and take that third spot from under the nose of Hampton.

NSU has a chance to finish the remainder of regular season play victorious with two of it’s three remaining opponents currently under .500; Saturday on the road against UMES (9-17, 6-8), Monday in the Nation’s Capital against Howard (10-16, 6-7), and hosting Hampton (14-3, 10-4) at home on March 1 to conclude the season.