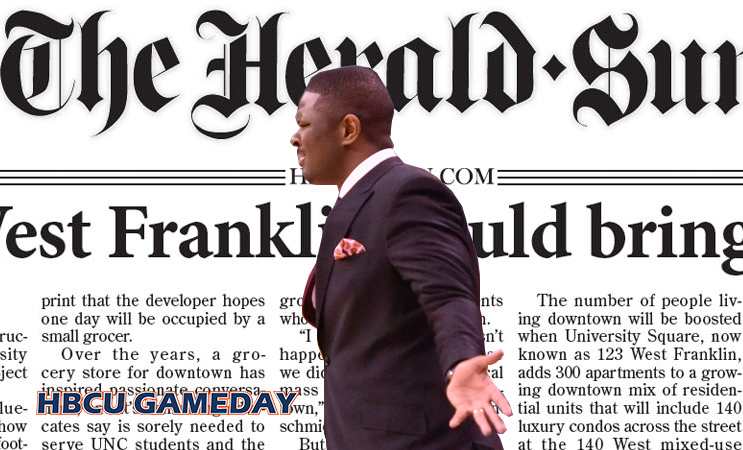 NC Central has won three MEAC football titles and two basketball titles in the last five years, but has no beat coverage.

What if I told you that one of the most successful HBCU athletic programs, a Division I member at that, did not have the local media coming to its basketball games? Sounds crazy, right?

Well, that’s exactly what is going on in Durham, NC.

North Carolina Central, the defending MEAC basketball champion, has been without a beat writer at the Durham Herald-Sun pretty much all season. It’s a change that many people have no clue about, but one that matters more than you think.

Prior to this winter, Jonas V. Pope IV was the Herald-Sun beat writer. The Elizabeth City State alumnus was in the press box at O’Kelly-Riddick Stadium and courtside at McDougald-McLendon Arena for every game after he took the position vacated by Brooke Pryor, who went on to cover the Oklahoma Sooners.

In fact, Pope was the latest in a long line of reporters from the Durham daily who had covered NCCU even back when it was in the CIAA and Division II. Those days appear to be gone.

The tradition of The Herald-Sun covering Eagles basketball started well before they won the 1989 NCAA Division II title. The NCCU program has a high profile for a MEAC school, and a popular and charismatic coach in LeVelle Moton.

It doesn’t matter. The metrics apparently show that N.C. Central stories don’t get a lot of clicks.

“Part of the shift has to do with the need to make sure we have an audience for our work,” Ruinsky said. “With limited resources, we need to focus as much as possible on areas of coverage of interest to the most readers. This is sometimes a painful process. We just don’t have the people to cover everything, and in the digital marketplace we need to make sure our stories find readers.”

Only four stories have run about NCCU basketball since October.

“I certainly understand the changing landscape of the media and how sports are being covered,” NCCU senior associate athletics director for strategic communications Kyle Serba said. “However, many of the compelling NCCU feature stories that Herald-Sun beat writers have penned would not have been possible without their regular presence on campus and consistent engagement with our student-athletes, coaches and athletics administrators.”

Many people will see the Herald-Sun’s cutback in coverage as an excuse to cut an HBCU out of the limelight in favor of more coverage of ACC schools and big-time recruits HBCUs can’t get, or pro hockey.

Before I give you my answer, let me ask you a few questions.

When was the last time you picked up a newspaper to read about your favorite HBCU basketball team? A physical, foldable, tangible newspaper? If you’re like most people, it has probably been a while.

Ok, better question…how often do you actually click on a story from your local media outlet to read what is being written about your HBCU? Probably not as difficult to think of as the first question, but probably not that often.

The fact is that in 2018, journalism is all about eyes, the same as its ever been. How many people read your product determines how many advertisers you can get and how much they will pay you. Back in the day, circulation was the key number, and often times it was a generous one. But along with technology comes analytics in the form of clicks. The more clicks media companies get, the more ad revenue they can command.

In other words, your clicks equal cash. So no matter how well-written a story is, like Pope’s piece on Moton’s jersey retirement, if no one reads it, it doesn’t encourage media companies to spend time paying staffers to work on it when they can be working on other things that will be consumed in masse.

When I started HBCU Gameday in 2012 I realized that HBCUs with consistent sports coverage were few and far between. NCCU was one of them. Since then I’ve written my share of stories that were well-researched and composed, yet barely registered in terms of clicks. It’s a deflating feeling to be sure, even as an HBCU advocate. Not only does it hurt the ego, it hurts the bottom line.

The Black Press has always covered HBCUs and HBCU sports, and we always will. But mainstream media is showing that they won’t be covering if you aren’t clicking.

A little over a year ago, I wrote a post called “Five Reasons Why Your HBCU Isn’t Getting Enough Sports Coverage.” The top reason on the list appears to be what ended the Herald-Sun’s coverage. If you value your HBCU’s coverage, you better get to clicking.