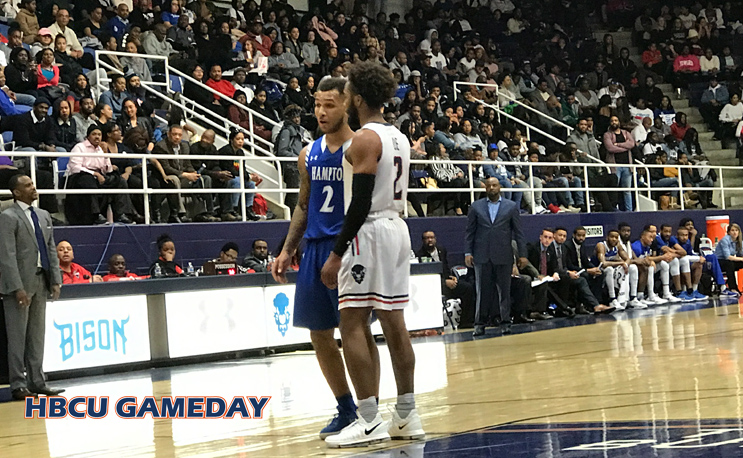 [postBannerAd]
For a team playing its fourth game in a week, Hampton looked mightly lively on Thursday night.

Hampton got off to a fast start, withstood a Howard rally and then finished strong to beat its rival 95-81 on the road.

Jermaine Marrow and Kalin Fisher led the way with Hampton, scoring 19 points each in the win. Three other HiU players finished in double-figures as well.

The scoring was a lot less balanced for Howard, who dropped its second game in a row. Freshman sensation R.J. Cole scored 27 points and had six assists, but he took 23 shots and turned the ball over four times. Sophomore C.J. Williams finished with 23 points in the loss.

Hampton got off to a 10-0 lead in the game’s opening minutes, but Howard managed to rally back. The visiting team pushed its lead back to double-digits in the first half, but led just 45-41 at intermission.

Imagine being down 10-0 and then boom, you’re only down 1 point.
Hampton leads Howard 14-13 with 13:20 remaining in the first half. pic.twitter.com/1OBehvPO7J

The second half, though, belonged to the Pirates, who outscored their rival 50-40 in the second half to preserve the win.

The Pirates continued to click offensively, scoring better than 80 points for the third game in a row and shooting 55 percent from the field for the game.

Hampton will return home after three straight road games before taking on a streaking Norfolk State team that has won four games in a row.