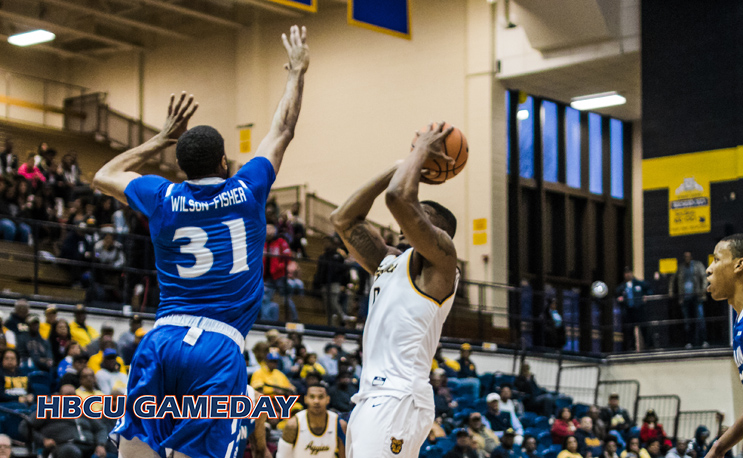 Both Savannah State and North Carolina A&T gave up a lot of points on Saturday, but both teams had stellar offensive nights to stay tied for the MEAC lead.

High-scoring games are Savannah State’s calling card, and Saturday was no exception. SSU beat South Carolina State 111-99 for its seventh-consecutive win. Dexter McClanahan was an all-around terror, scoring 23 points, grabbing 10 rebounds and dishing out five assists to help his team win its seventh game in a row.

Five other Tigers scored in double-figures, while Patrell Rogers (26 points) and Damani Applewhite (24) scored more than half of the Bulldogs points.

Up the road in Greensboro, A&T didn’t break the century mark, but it got close. A&T beat Hampton 92-84 at home to improve to 14-9 overall and 7-1 in the MEAC. Davaris McGowens (21 points and eight rebounds) led the way as four of his teammates also finished with double-figure scoring including freshman Kameron Langley who scored 17 points and dished out seven assists in the win.

Freshman @thekamlangley hit a couple of spectacular shots for @ATAggieHoops, including this one that had #ClubCorbett jumping up and down and sharing candy and stuff… pic.twitter.com/NlphioHWgc

North Carolina Central picked up where it left off against North Carolina A&T on Saturday against Delaware State, and that was not a good thing. NCCU trailed by as many as 17 in the first half before picking up the pieces and taking control of the game just before halftime. Raseean Davis led the way with 23 points and 10 rebounds as NCCU held DSU below 30 percent from the field in the second half.

Howard slips past FAMU in OT

Howard has made a habit of keeping its games against MEAC opponents close this season and that continued on Saturday. HU went into overtime for the third home game in a row against FAMU, and for the third-straight game it found a way to come out on top.

R.J Cole 👀
Bison lead the Rattlers 50-45, 12:33 remaining in the second half. pic.twitter.com/IViyCwTYyh

The Bison led by as many as 10 points with just over six minutes to go, but FAMU went on a 14-4 run to tie the game at 74 and force overtime. They scored the first six points in overtime and came up with an 83-80 win to improve to 4-4 in conference play. R.J. Cole led the way with 24 points and eight rebounds and C.J. Williams finished with 22 points, surpassing the 1,000 point career mark just 58 games into his college career.

Desmond Williams had a monster game with 33 points and 13 rebounds in the loss for FAMU.