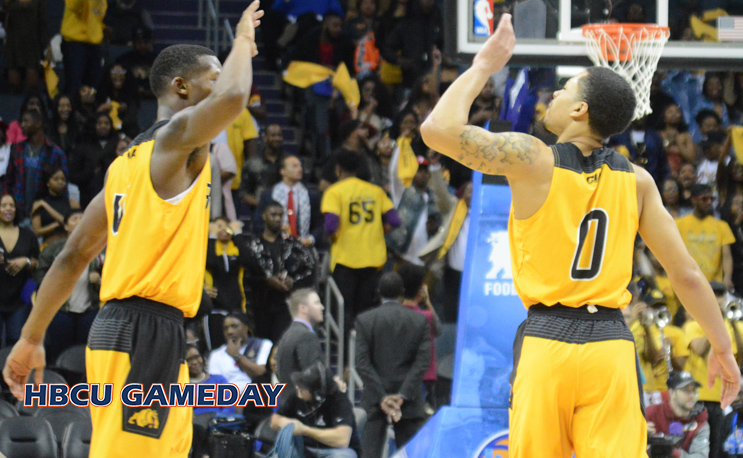 Bowie State travels to Virginia State and wins it by 10.

ETTRICK, Va. – Bowie State men’s basketball picked up a huge CIAA divisional win on Saturday afternoon, upsetting 8th ranked Virginia State 65-55. The win improves the Bulldogs to 3-1 in the Northern Division, 5-5 in the CIAA and 10-11 overall.

Neither team could really get on track in the first 10 minutes of action, but Bowie State’s Bulldogs did lead 20-18 heading into the under eight-minute media timeout.

Bowie State led the majority of the first half, but Virginia State took its first lead of the game (26-25) at the 4:06 mark after a William Vedder (Washington, D.C) layup.

Bowie State narrowed the deficit to 37-35 and a Belle triple shifted the advantage over to the Bulldogs at 38-37 at the 15-minute mark of the second half. Following the media timeout, Belle knocked down a pair of free throws and followed that with a layup to make the score 42-37 Bowie State, forcing Virginia State’s Trojans to call a timeout.

Yohance Fleming (Bowie, Md.) scored his first points of the game on a little floater in the paint to continue the Bulldogs run.

VSU’s Lual Daniel Rahama (Newport News, Va.) stopped the Bowie State run but missed the free throw sending Bowie State into the under 12 media time out with a 44-39 lead.

Bowie State’s lead grew to a game-high 10 points (49-39) after a massive two-handed dunk by Hayes. The Bulldogs stifling defense made a major difference in the second of play.

Cyonte Melvin (Hampton, Va.) capped off a 6-0 Virginia State run to trim the Trojans deficit to 51-47 at the 6:37 mark. Melvin knocked down two free throws to cut the Bowie State lead to 51-51 with 3:19 remaining in the highly contested contest.

The Bulldogs had enough in the tank in the end for the 69-55 upset of the nationally ranked Trojans.

The Bowie State men’s basketball will be idle until returning to action on Saturday (February 3rd) at Elizabeth City State. Game time in ECSU’s Vaughan Center is set for 4 p.m.