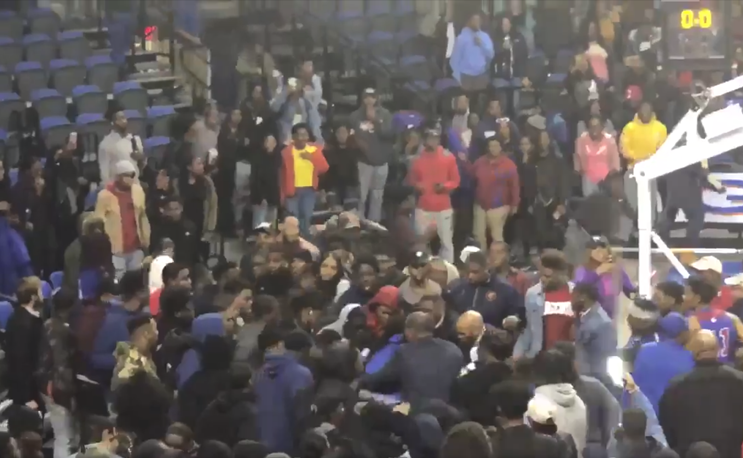 At end of game fans and players exchange blows.

It was a great rivalry game that had everything you wanted in a college basketball contest, until the very end. Virginia State’s come from behind win over Elizabeth City State was scarred by a huge brawl after the game was over, that saw players and fans exchanging blows into the seats at the VSU Multipurpose Center.

The brawling was captured on social media by several fans in the arena on their cell phones.  Different angles of the video appear to only show Elizabeth City State players engaged in the fight. It’s not clear how the fight may have started, however, it appears to center around an incident behind one of the basketball goals involving a player and a group of fans.

My school getting out of hand #vsu pic.twitter.com/QTaA9mBy4Z

The player, whose identity can’t clearly be seen, is tackled into the stands by a group of about five people. His teammates and other spectators rush to that area and a melee quickly ensues. A mix of people attempting to break up the fight, escalate the fight, film the fight, or leave altogether all become engulfed together.

It is not known if there were any injuries but both schools released statements on Thursday afternoon. Virginia State released the following statement via the university Twitter account:

We have heard from the VSU leadership and they have apologized for the unsportsman-like conduct of their fans.

The matter is currently under investigation by VSU officials, including their campus police. We have been informed that criminal charges will be filed against the individuals who assaulted our players.

The safety and well-being of our students and staff is our primary concern. We will be monitoring the situation until resolution.