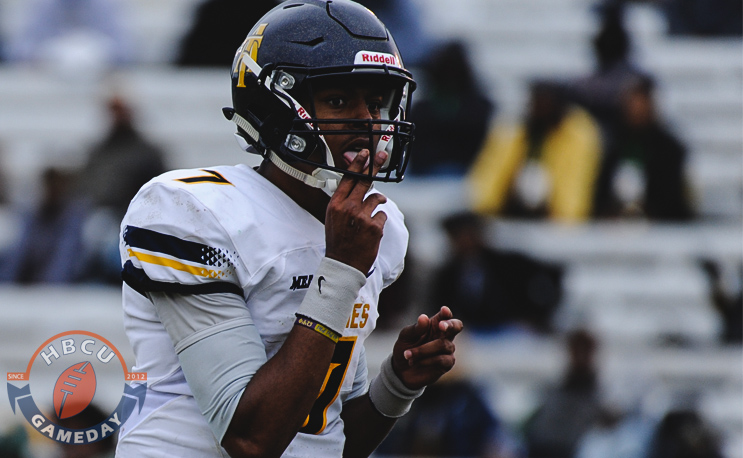 An injury ended Lamar Raynard’s 2016 season. The newly crowned MEAC Offensive Player of The Year’s persistence has paid off.

This time last year, Lamar Raynard was hoping for redemption. The North Carolina A&T quarterback missed the tail end of his first season as a starter after tearing his pec in practice, just before his team’s big game against North Carolina Central.

Raynard got his redemption this season and on Tuesday, was named the MEAC’s Offensive Player of The Year. The announcement took place at the Waldorf Astoria in New York City.

His win marks the fourth year in a row an Aggie has won the award, as former teammate and current Bears running back Tarik Cohen won it from 2014 through 2016. Raynard is the first Aggie quarterback to win the award since Connell Maynor in 1991 and joins Alan Hooker (1986) and Ellsworth Turner (1976).

One For The Books

The High Point, NC native had a banner season in 2017, throwing for single-season school records in passing yards (2,707), completions (186), touchdown passes (26), touchdowns responsible for (29) and total offense (2,875). He has a chance to improve on those numbers when A&T takes on Grambling in the Celebration Bowl on Dec. 16.

He’s also up for several more awards, including the Walter Payton Award for FCS Football’s top offensive player. He’s also a finalist for the Deacon Jones Trophy, given to the top player in Black College Football.

The most important number for Raynard is 11. That’s the number of wins he’s led A&T to this season, against zero losses.  After his team’s most recent win, against rival North Carolina Central, Raynard reflected on his journey from one year to the next.

“You know I was questioning like, ‘why’ would this happen at the time,” Raynard said of his 2016 injury. “But I knew that God had something for me. He was able to let me stay healthy this whole year, and I knew I had to just take advantage of this moment.”