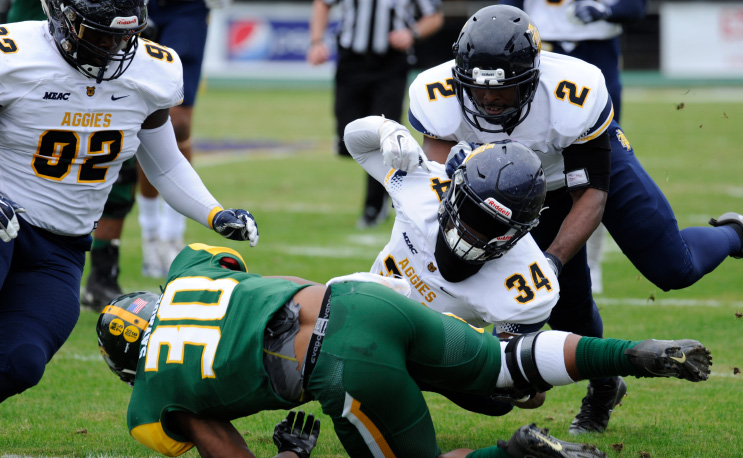 Who can clinch this weekend? Who still has life? We break down MEAC and SWAC scenarios.

Two weeks remain in the regular season for FCS Football and the championship picture in both the MEAC and SWAC still has a few dancers out on the floor.  Grambling State and North Carolina A&T appear to be on a collision course for the Celebration Bowl but not so fast, here’s a look at who might crash the party.

NCAT controls their own destiny in the MEAC but so does North Carolina Central University in the final two weeks of the season.  If NCAT wins out, the Aggies would finish 8-0 in conference play and win the championship straight up.  NCCU can do no better than 7-1 but a win against NCAT would give it the head to head and another trip back to Atlanta. Should A&T lose to both Savannah State and NCCU, and the Eagles win out, it would be an outright title for NCCU.

Howard is still alive but it needs a lot of help. The Bison would need NCAT to lose its final two games plus NCCU would need to lose against Bethune-Cookman University. Howard’s only loss to this point in the MEAC was at the hands of NCCU, so it has no leverage should there be a tie-breaker situation.

HU would lose in a tiebreaker to NCAT as well, because of the Aggie’s unblemished record out of conference.  NCAT and Howard did not play head to head this season. Oh yeah, the Bison still have to keep winning themselves, closing out with Norfolk State and Hampton is no small task.

The best CONFERENCE record still decides the SWAC divisional champions, despite some communication confusion earlier this week.  The SWAC cleared up the misunderstanding in an email sent out on Friday confirming conference record trumps division, but bad info spreads quickly.

BREAKING: From the SWAC office, an Alabama State loss to Grambling does NOT secure the title for Alcorn. Divisions are decided by division record, not conference record. Braves must win 1 more game.

Not since Lazarus have we seen a resurrection like the one we are witnessing in Montgomery, Alabama.  The Alabama State Hornets have gone 3-0 since Donald Hill-Eley took over as interim coach after ASU fired then-coach Brian Jenkins. Texas Southern, Alabama A&M, and Jackson State don’t qualify as murderer’s row in the SWAC but they are wins nonetheless.  Those wins have kept ASU alive in the race for the SIAC East crown.

Alabama State is 3-2 in conference play with two remaining games while Alcorn State is 4-1.  The Braves beat the Hornets straight up back in October so Alabama State would have to win out and hope for Alcorn to lose to both Mississippi Valley State and Jackson State, two teams with a combined record of 3-15 this year.  Alcorn State is more than likely not going to let that happen but Alabama State could make this a season to remember by defeating Grambling on Saturday.

Grambling could clinch the West if it instead beats Alabama State and if Southern falls short against Texas Southern on Saturday.  As long as Southern beats Texas Southern on Saturday it won’t really matter what happens in Montgomery, the Western Division would have to be decided in the Bayou Classic.  The G-Men are currently 5-0 in conference play and Southern still has a legitimate shot to win the division at 4-1 if they just win out.

Both divisional winners will meet in the final SWAC Championship game in Houston on December 2nd.  The champions from the MEAC and SWAC face off in the Celebration Bowl on December 16th in Atlanta.