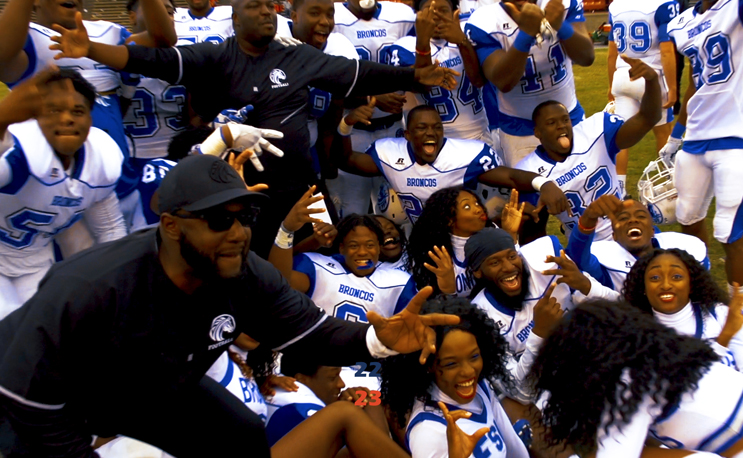 Fayetteville State did something on Saturday that it hasn’t done since 2004, beat Winston-Salem State. FSU won a thrilling fourth-quarter comeback, that was… then wasn’t… then was again. The 23-22 victory to win the Southern Division title was an appropriate ending to a wild 125th season of Black College football in the CIAA. Coming into the final weekend, there were six teams with legitimate shots at going to the championship game and what played out was the stuff of old-timers tailgate lore.

You Could feel it in the Air

The atmosphere at Bowman Gray Stadium was like something out of the movie Braveheart. The cool chill in the air complimented the pale grey sky as a steady drizzle rained softly across the warriors’ faces. Players from both teams were energetic and talkative. Most guys looking for any moment to show the audience behind the camera lens they were ready for the challenge.

This game had everything you want in a David vs Goliath style regular season finale. The home team and Goliath-like figure get out to a hot start, beating but not completely crushing their “David-esque” opponent. The upstarts are playing just good enough to stay in it, when out of nowhere… lightning strikes! The lightning for upstart Fayetteville State was an 89-yard kick return touchdown by Brandon “Sauce” Smith who took a 22-7 second-half lead and cut it down to size on one play. Then, right on cue… Goliath starts to wobble as the little guy continues to hit him with lefts and rights. The haymakers for the Broncos happened to be a huge punt return and a 4th and 9 conversion with less than a minute left to play.

And just when it looks like Goliath will tumble… he roars back with a shot so big that there’s no way David can bounce back… like WSSU Quarterback Rod Tinsley’s 47-yard completion down to the one-yard line with eight seconds left on the clock. Only to see Goliath’s own lack of discipline become his true demise, as WSSU gets a 15-yard penalty leaving the sidelines to celebrate and the miss the subsequent game-winning field goal.

The Broncos Head to Salem

Defeating the two-time CIAA Champs in their house to win the division is a sweet feeling for Bronco Nation. But they realize the need for an “attitude check” as they have a date with Virginia State University in Salem, Virginia for the CIAA Title.