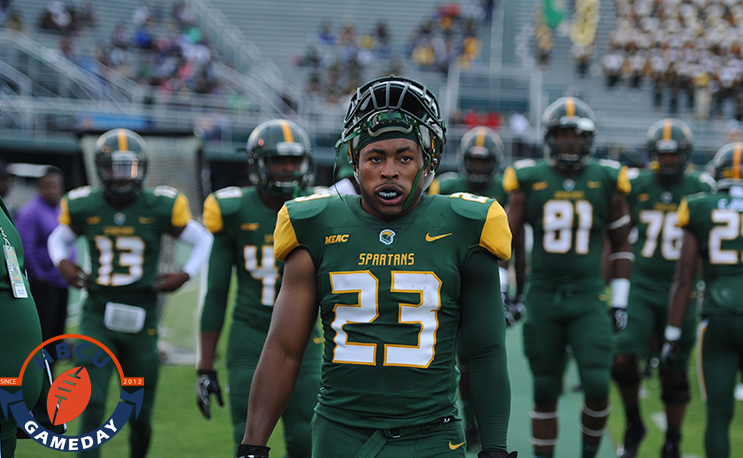 Norfolk State’s hopes for the MEAC football title are pretty much over after a shocking homecoming loss to Savannah State.

NORFOLK, Va. – Visiting Savannah State broke a 6-all halftime tie by outscoring Norfolk State 21-3 in the second half en route to a 27-9 win over the Spartans in front of 17,218 Homecoming fans on Saturday at Dick Price Stadium.

The win dropped NSU to 3-5 overall, 3-2 in the MEAC, while the Tigers improved to 1-7, 1-4. The loss came hours after NSU learned of the loss of Nicholas Ackies, an 18-year-old defensive lineman. A former NSU player, Jaquan Anderson, was arrested for the homicide.

NSU started off strong, taking its first possession of the game and marching 74 yards in 13 plays. Freshman quarterback Juwan Carter capped the drive with a 3-yard TD run with 7:00 left in the first quarter. The extra point missed, keeping NSU’s lead at 6-0.

The Tigers tied it up right before the half on D’Vonn Gibbons’ 19-yard TD pass to Derek Kirkland. The extra point was blocked by Spartan defensive end Nigel Chavis.

Much of the third quarter was a defensive struggle, but SSU took the lead for good at 13-6 with 18 seconds left in the period on a 5-yard run by Jaylen McCloud.

NSU trimmed its deficit to 13-9 on a 27-yard Josh Nardone field goal at the 8:32 mark of the fourth quarter. But the Tigers scored on their final two possessions of the game, a 2-yard TD run by Gibbons and a 5-yard run by Nicholas Bentley, to pull away.

Carter completed 17 of 33 passes for 150 yards. Freshman running back C.J. Jones rushed for a career-high 51 yards on seven attempts as the Spartans finished with a season-high 123 yards on the ground. Receiver Marcus Taylor, the MEAC’s leader in receptions, caught seven passes for 43 yards.

Defensively, Chris Lee had seven tackles, 3.5 for loss, including 2.5 sacks.

The Spartans play their final home game of the season next Saturday when they host North Carolina A&T at 1 p.m.